Pygmy marmosets are the world’s smallest monkeys weighing 4 – 7 ounces, measuring about 5 inches long with an 8 inch tail. They live mostly in the rainforests of South America with a few in southeast Africa.

The family units are composed one dominant female, who reigns over the group, a reproductive male, second in command, and the offspring from one to four litters of these two. The older siblings are dominant over the younger siblings except for infants who are not a part of the dominance hierarchy.

The presence of an adult female may suppress ovulation in other females. Only the dominant female reproduces.

When two male Pygmy Marmosets from competing families meet, they will threaten each other with rapid flattening and erection of their ear tufts.

After the first 24 hours of life, the infants are carried by the adult male (see below) or juveniles and returned to the adult female for nursing. This practice relieves the mother and gives siblings practice for parenthood. 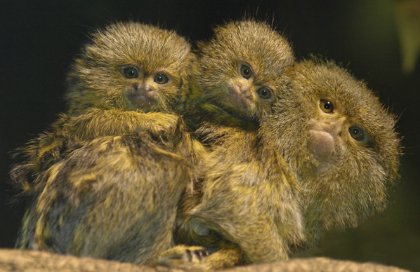 Due to the Pygmy Marmosets incredibly small size, they are able to live in the very highest leaves of a tree.

They are swift and their coloration makes great camouflage.

They are listed as special concern or somewhat threatened because of habitat destruction and the pet trade.