ALL THE SATELLITES ORBITING EARTH 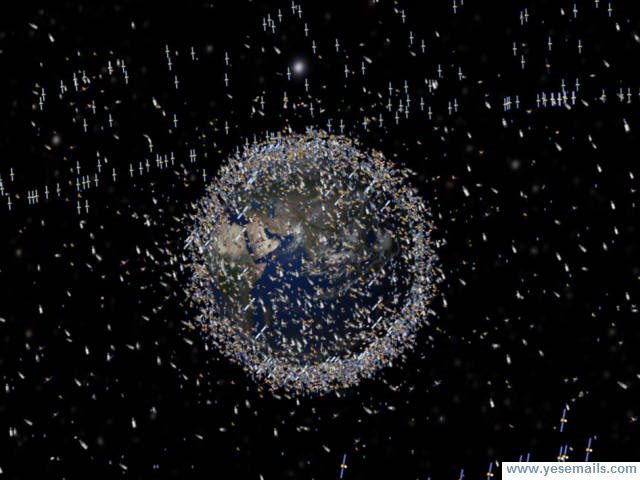 The following remarkable photographs from orbiting satellites capture ways people have transformed the face of Earth, for better or worse.  Benjamin Grant catalogs satellite images on his Instagram account called Daily Overview.  Grant uses imagery taken from DigitalGlobe, a collection of Earth imaging satellites that provide data to services like Google Earth.  Some of the images have been enlarged to view more detail. 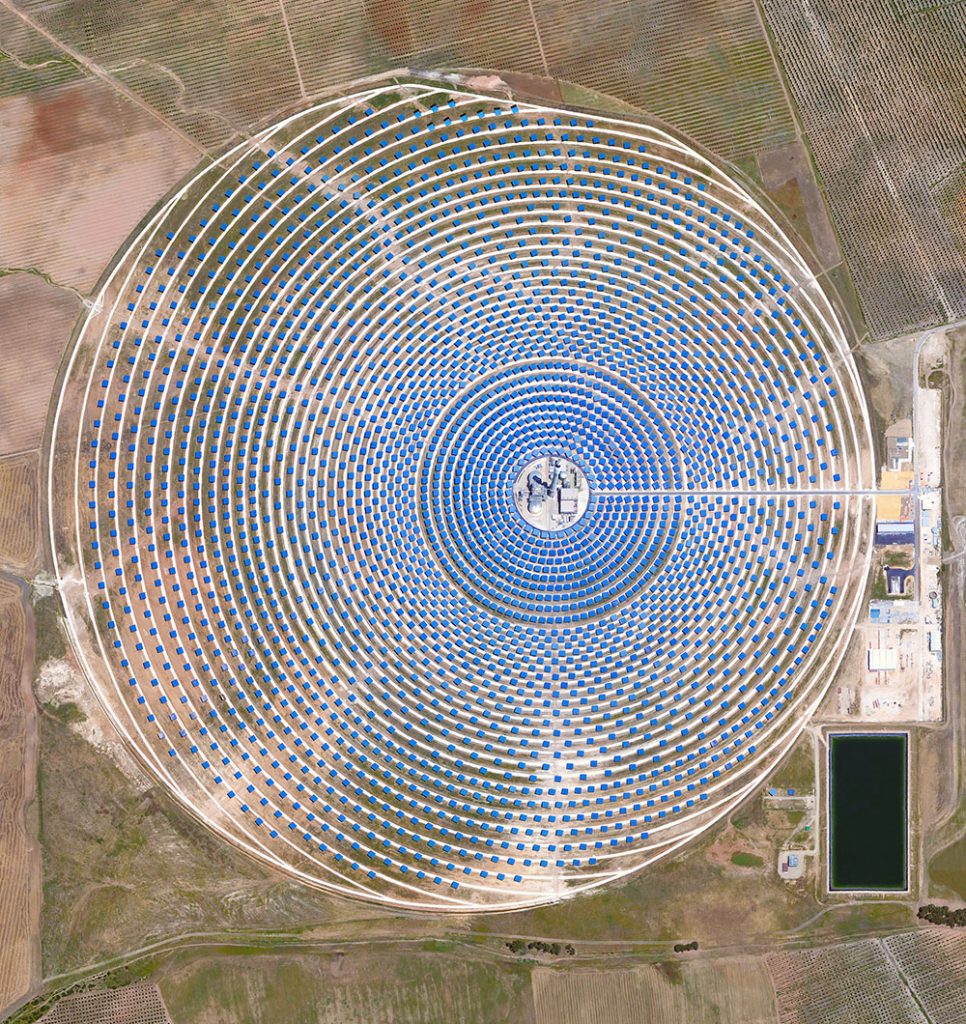 Gemasolar Thermosolar Plant in Seville, Spain. The solar concentrator contains 2,650 mirrors that focus the sun’s thermal energy to heat molten salt flowing through a 140-metre-tall (460-foot) central tower. The molten salt then circulates from the tower to a storage tank, where it is used to produce steam and generate electricity. 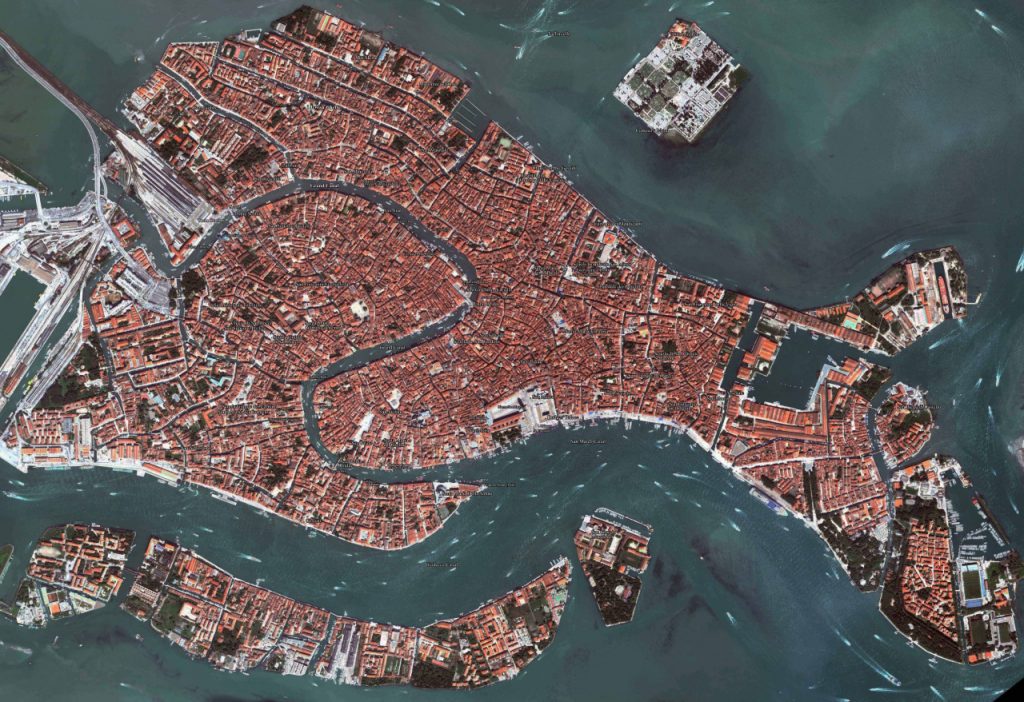 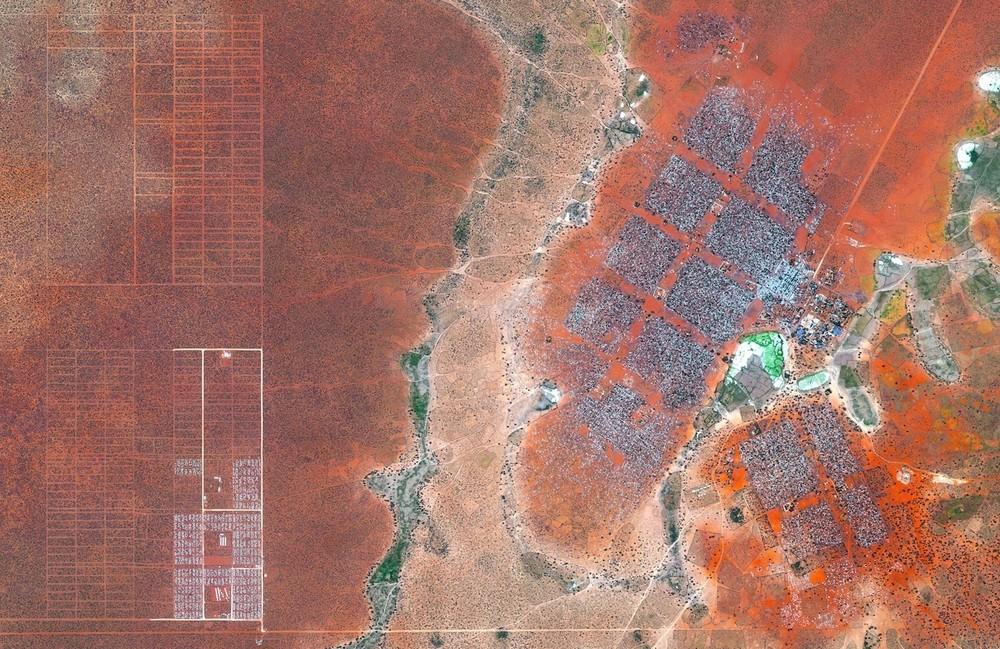 Hagadera, seen here on the right, is the largest section of the Dadaab refugee camp in northern Kenya and is home to 100,000 refugees. To cope with the growing number of displaced Somalis arriving at Dadaab, the UN has begun moving people into a new area called the LFO extension, seen on the left. Dadaab is the largest refugee camp in the world with an estimated total population of 400,000. 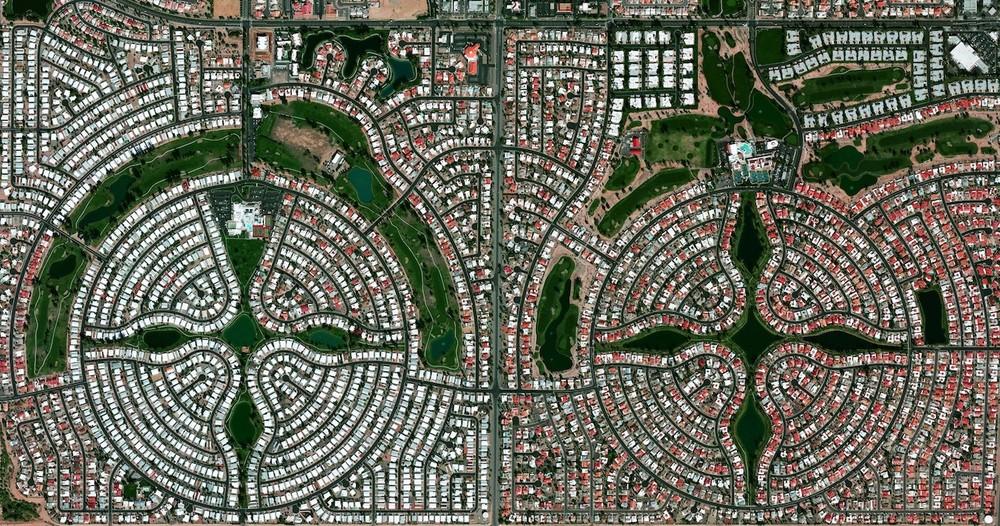 Sun Lakes, Arizona, USA is a planned community of approximately 14,000 residents, most of whom are senior citizens.

Hạ Long Bay, located in the Quảng Ninh Province of Vietnam, is a stunningly beautiful destination. Here, towering limestone pillars and tiny islands topped by a rich, green forest rise from the beautiful waters of the Gulf of Tonkin. 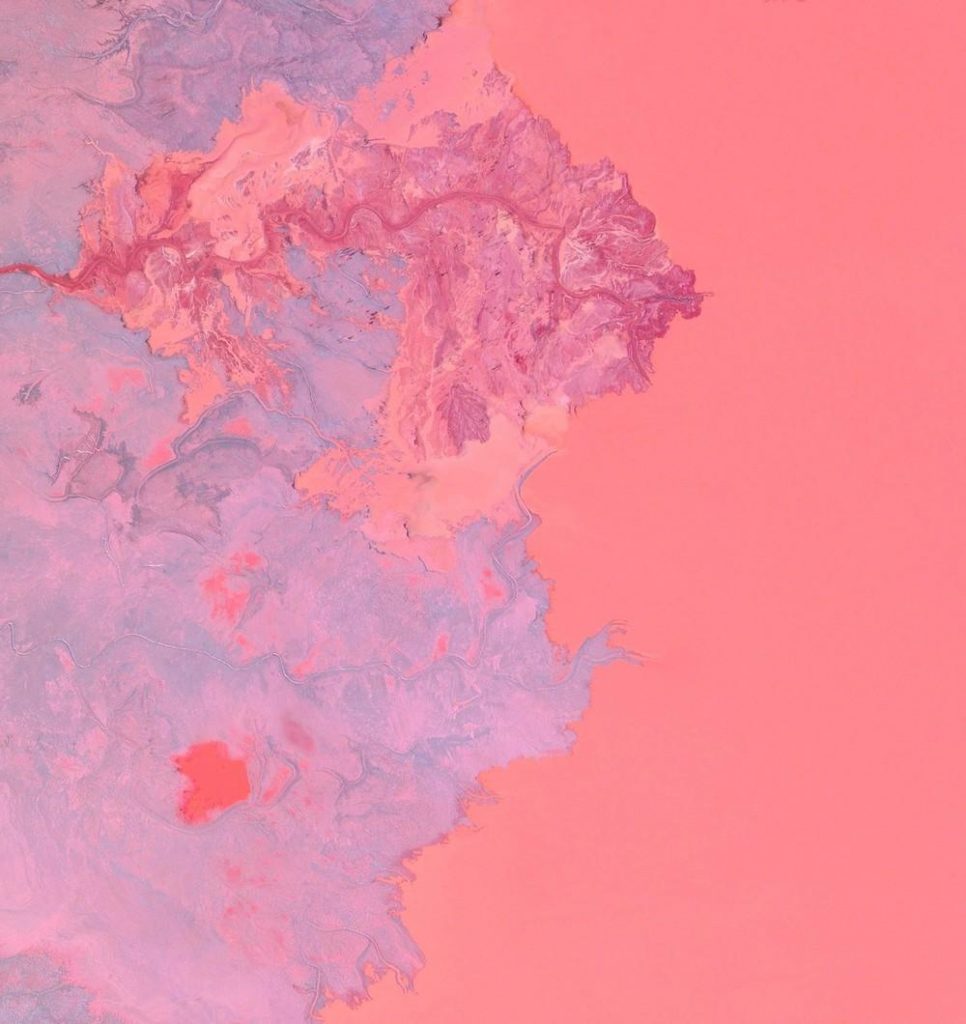 Tailings are the waste and by-products generated by mining operations. The tailings seen here were pumped into the Gribbens Basin, fron iron ore mines in Michigan, USA. Once the materials are pumped into the pond, they’re mixed with water to create a sloppy form of mud known as slurry. For a sense of scale, this Overview shows approximately 2.5 square kilometres (1 square mile) of the basin. 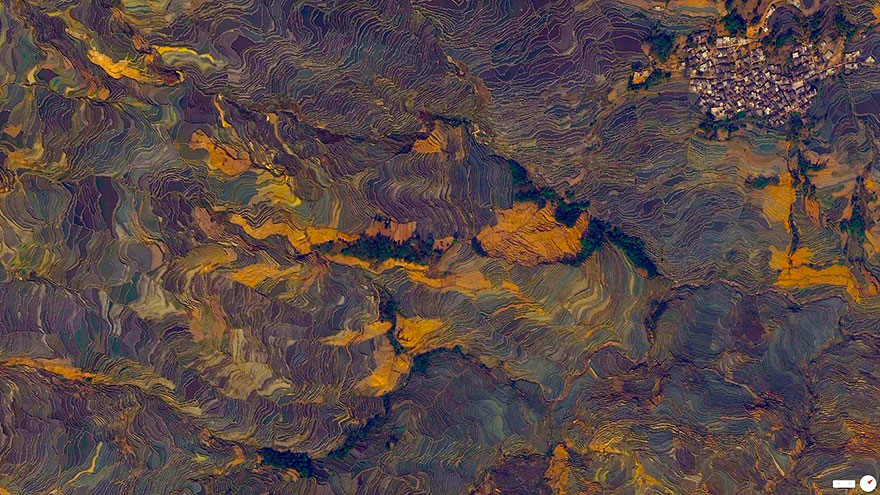 Rice paddies, constructed in steps, cover the mountainsides of Yuanyang County, China. Cultivated by the Hani people for the last 1300 years, the slope of the terraces varies from 15 to 75 degrees with some having as many as 3,000 steps.

The largest aircraft storage and preservation facility in the world is located at Davis-Monthan Air Force Base in Tucson, Arizona, USA. The boneyard contains more than 4,400 retired American military and government aircrafts.

Shipping containers are stacked at the Port Newark Container Terminal in Newark, New Jersey, USA. The massive facility handles over 600,000 shipping containers every year and has begun expansion projects that will increase annual capacity to 1.1 million containers by 2030.

The Norfolk Southern Railway operates 21,300 miles of track in 22 states, primarily in the Southeastern US. Inman Yard in Atlanta, Georgia, pictured here, is one of the major railyards that houses a portion of the operation’s 3,648 locomotives and 79,082 freight cars.

Tulip fields in Lisse, The Netherlands 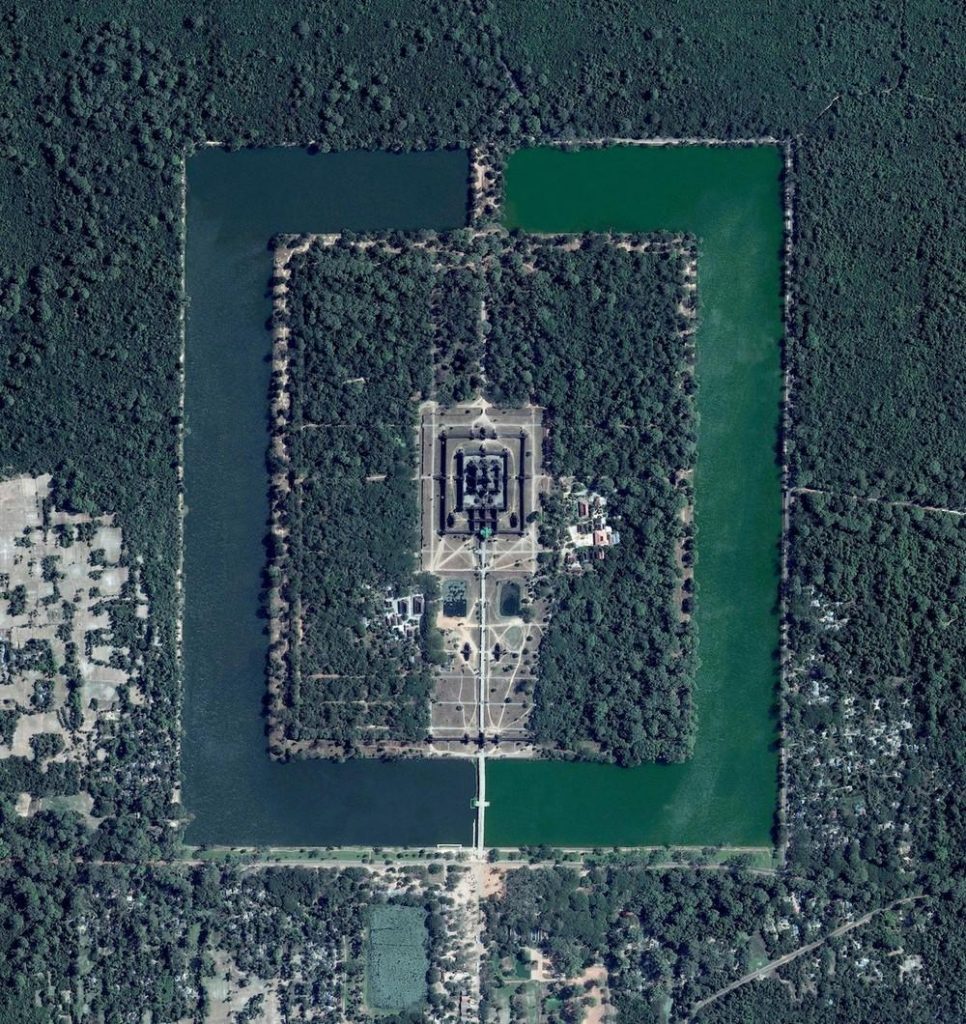 Angkor Wat, a temple complex in Cambodia, is the largest religious monument in the world (first it was Hindu, then Buddhist). Constructed in the twelfth century, the 820,000 square meter (8.8 million square feet) site features a moat and forest that surround a massive temple at its center. 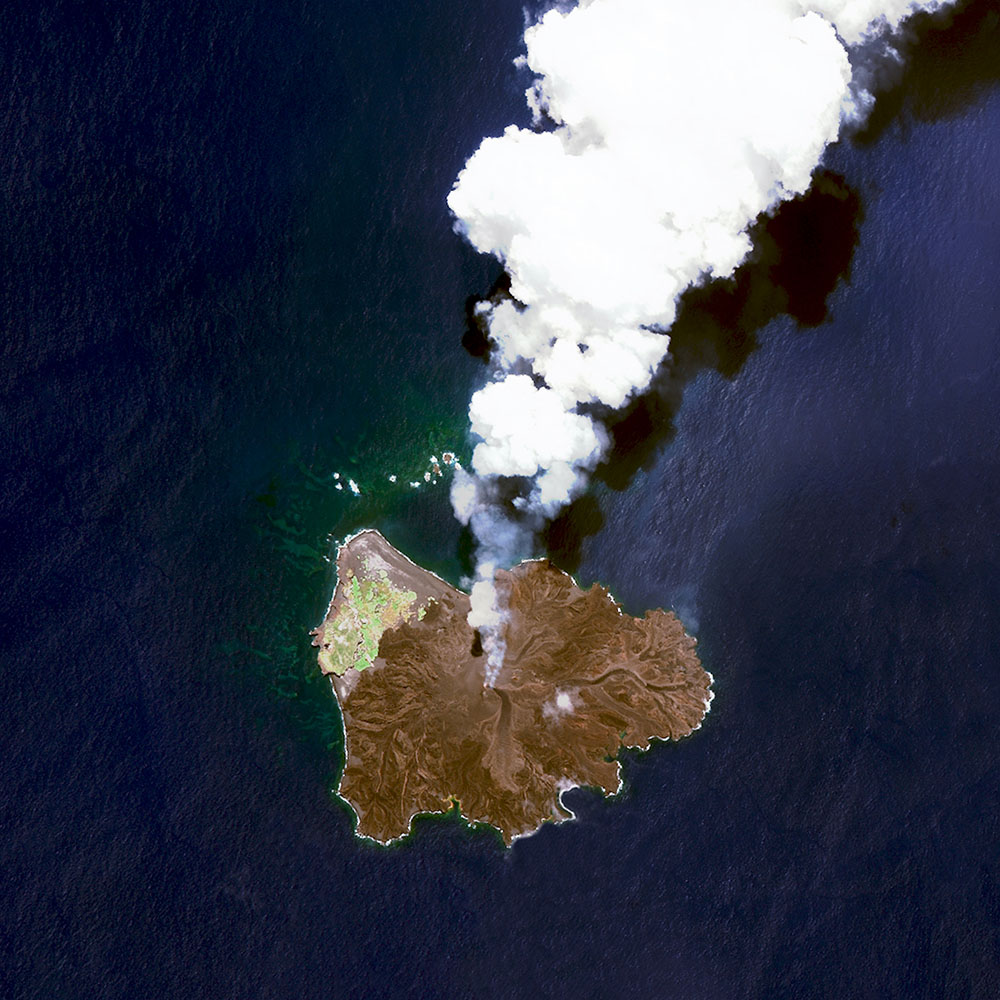 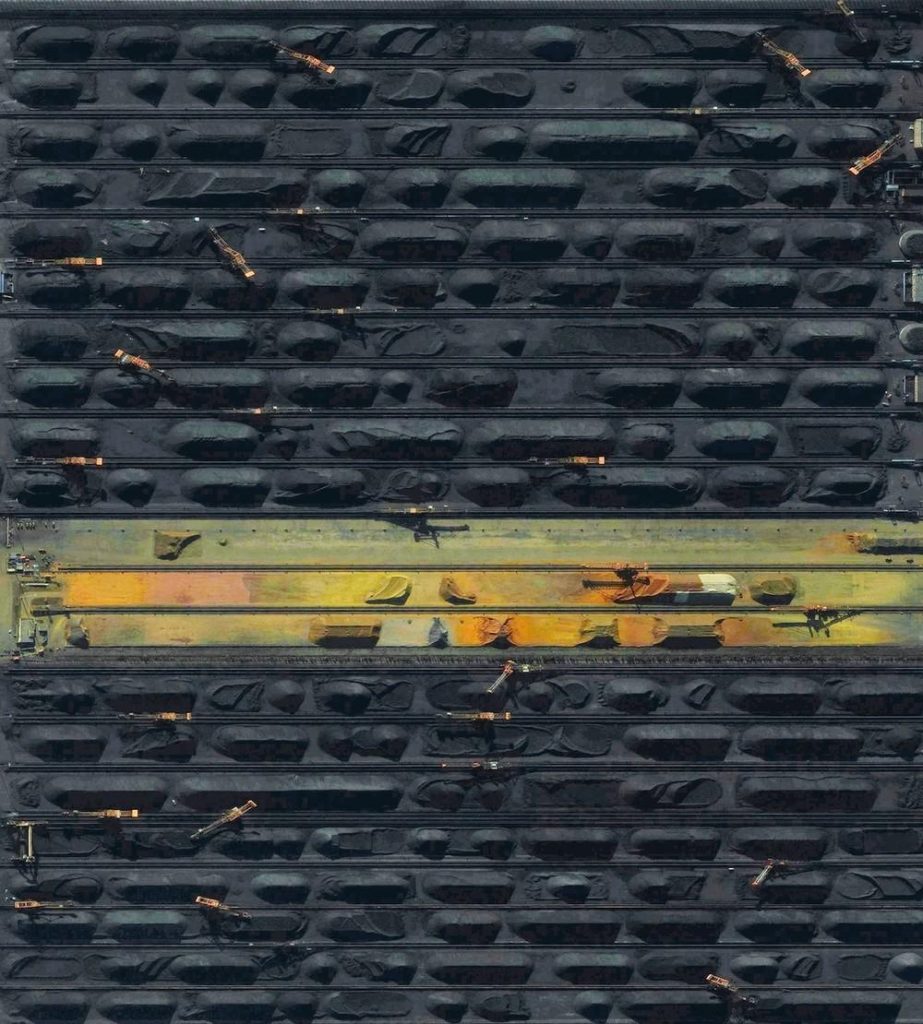 The coal terminal at the Port of Qinhuangdao in China is the largest coal shipping facility in the country. From here, approximately 210 million tons of coal are transported to coal-burning power plants throughout southern China every year. 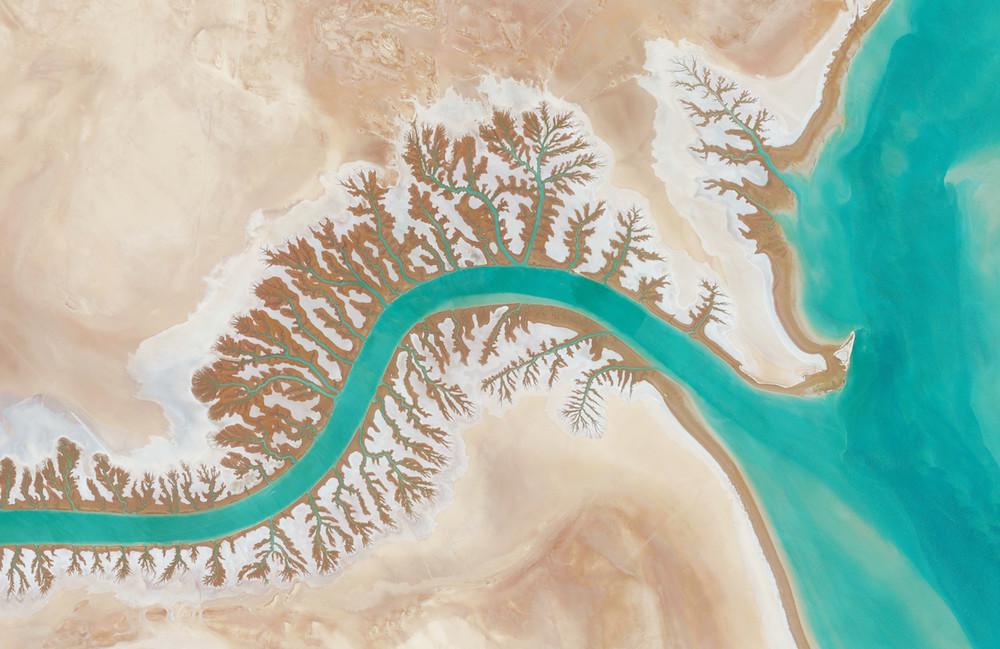 Dendritic drainage systems are seen around the Shadegan Lagoon by Musa Bay in Iran. The word ‘dendritic’ refers to the pools’ resemblance to the branches of a tree, and this pattern develops when streams move across relatively flat and uniform rocks, or over a surface that resists erosion. 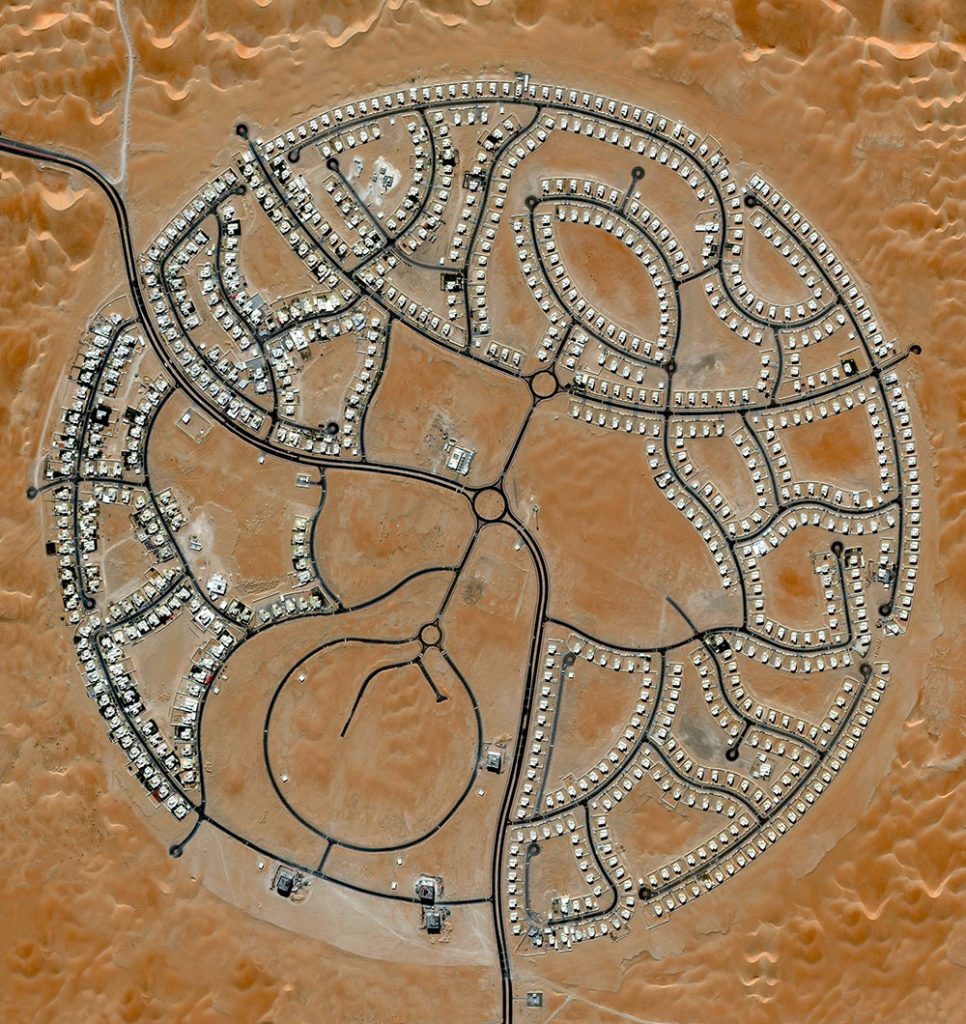 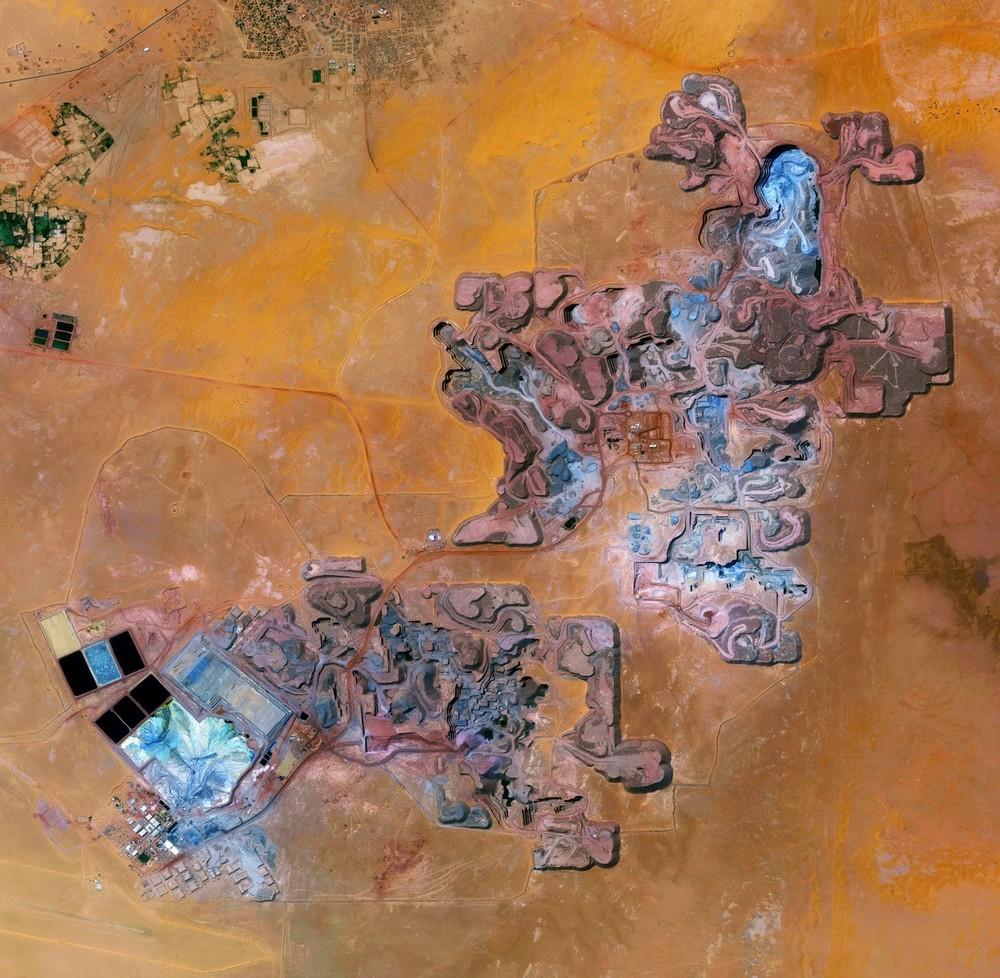 The Arlit uranium mine is located in Arlit, Niger. French nuclear power generation, as well as the French nuclear weapons program, are both dependent on the uranium that is extracted from this mine in the former French colony – more than 3,400 tons per year.

Mount Fuji is an active volcano and the tallest peak in Japan, rising 3,776 meters (12,389 feet). As seen in this Overview, Fuji has an extremely symmetrical cone, which is snow capped several months of the year. 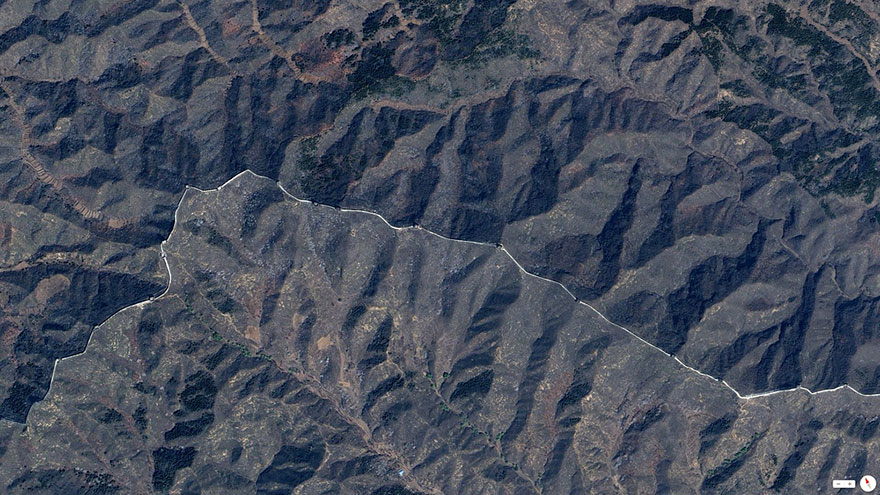 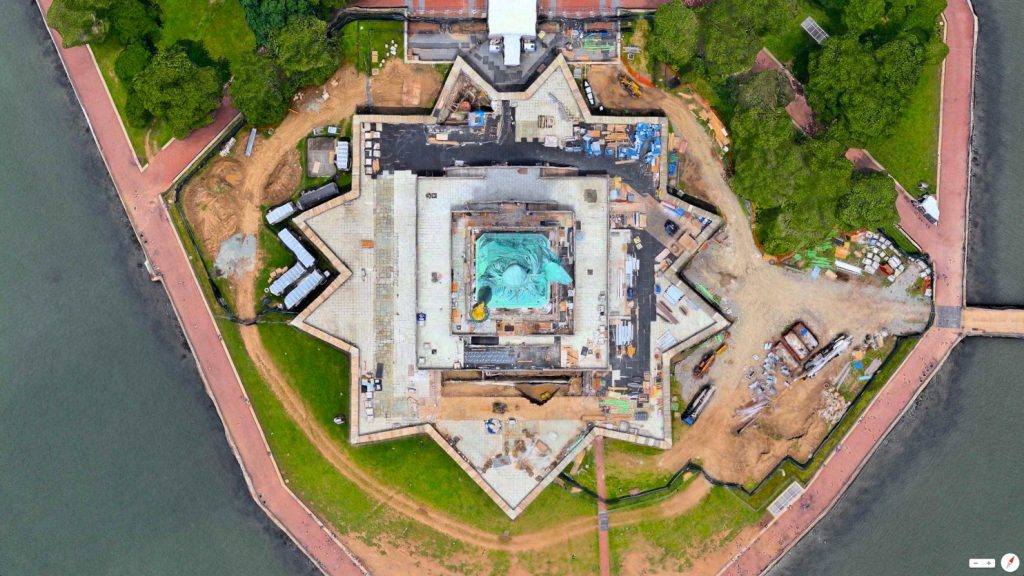 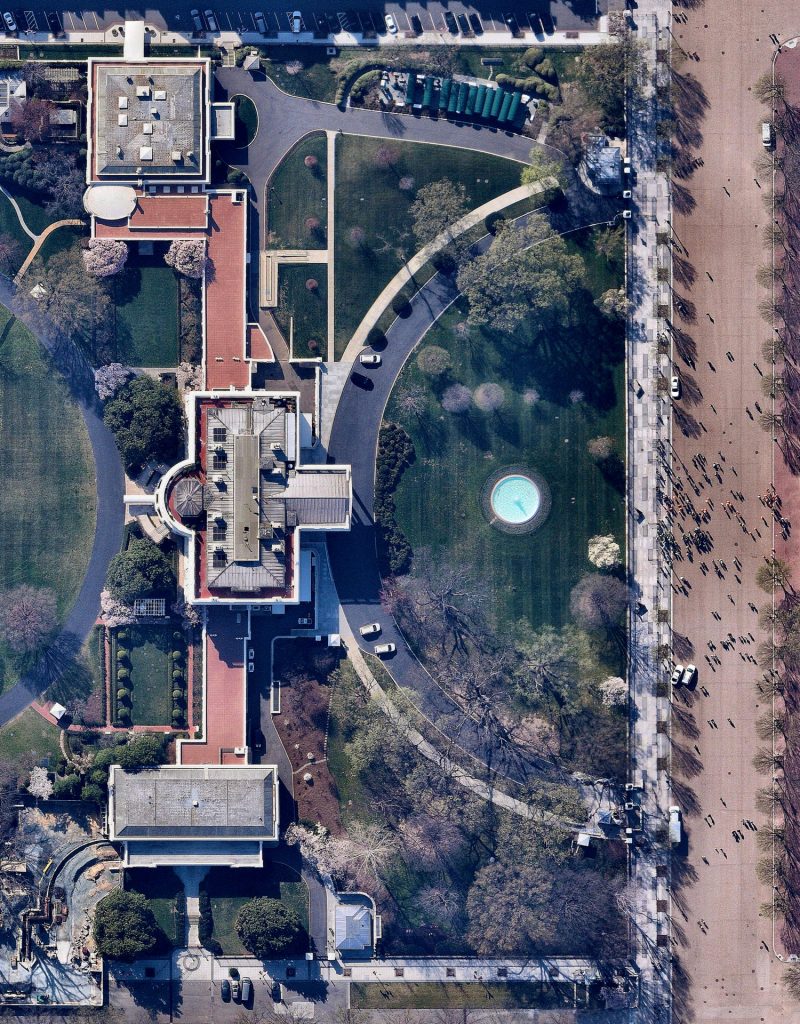 The White House, home of the President of the United States in Washington, D.C. 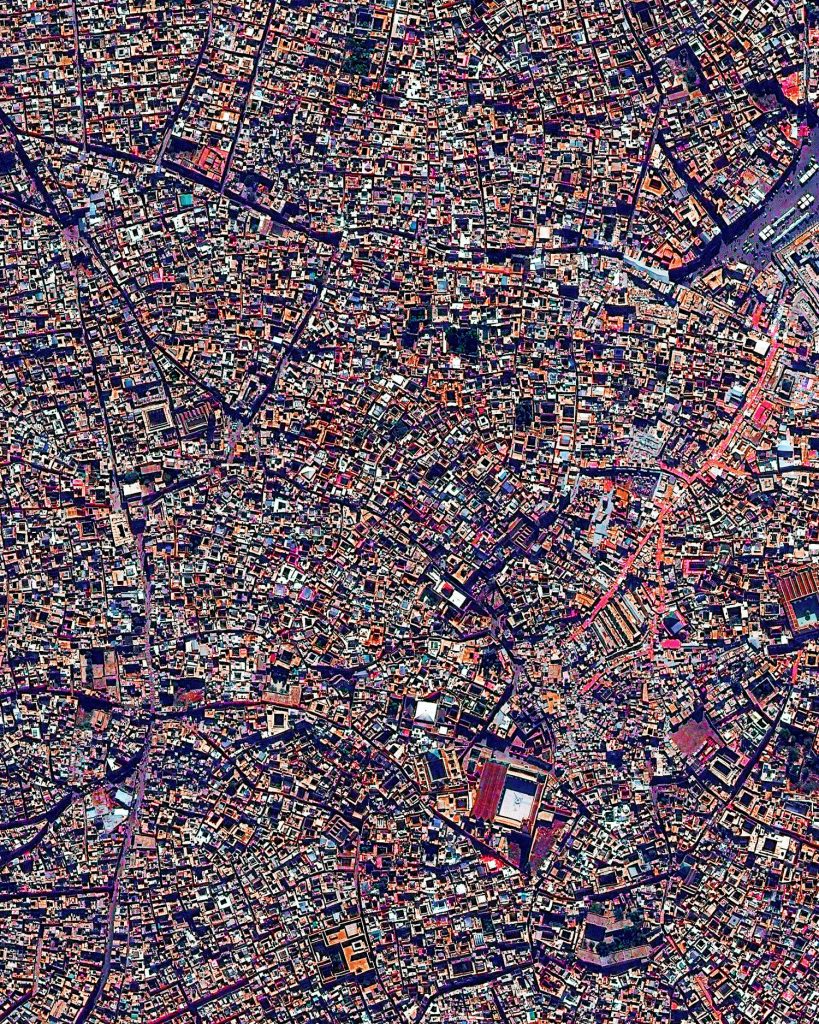 The medina quarter in Marrakesh, Morocco is characterized by its winding, maze-like streets. Because the intricately connected honeycomb of alleyways narrows to less than a meter wide (~ 3 feet) at certain spots, the area is generally free from car traffic. 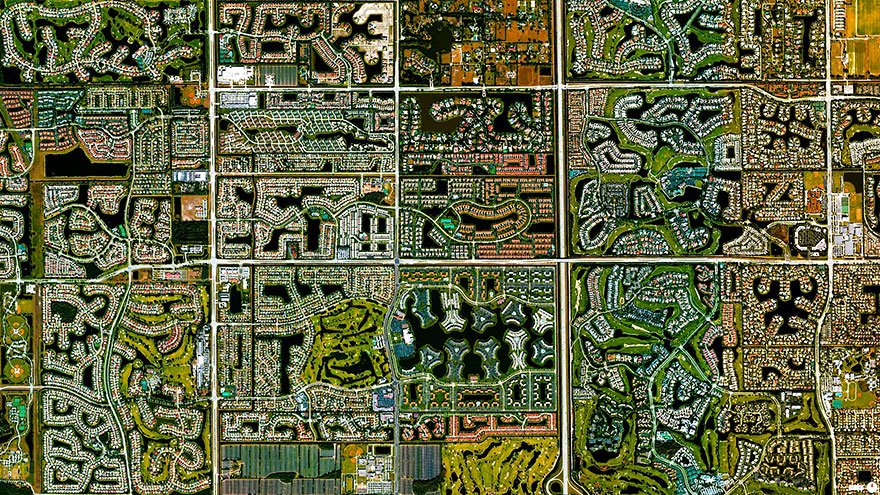 Bourtange is a village with a population of 430 in the municipality of Vlagtwedde in the Netherlands. The star fort was built in 1593 during the Eighty Years’ War when William I of Orange wanted to control the only road between Germany and the city of Groningen. Bourtange was restored to its mid-18th-century state in 1960 and is currently used as an open-air museum. 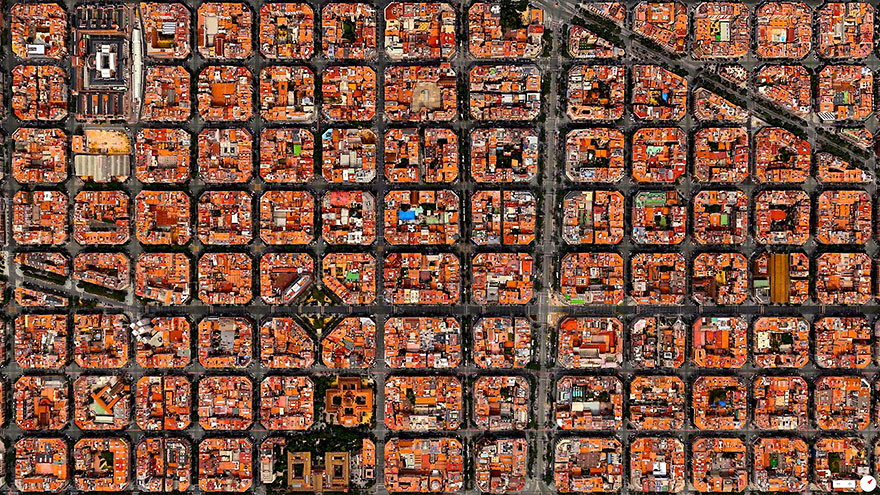 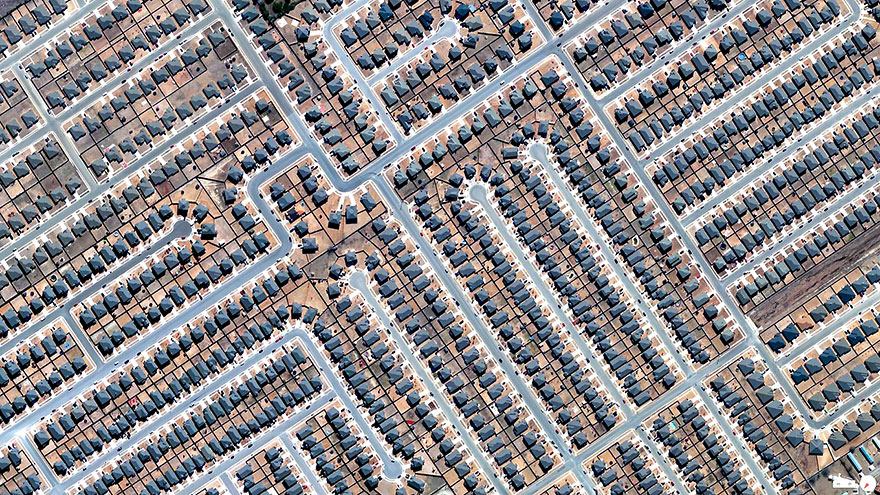 Sossusvlei is a salt and clay pan located on the edge of the Namib Desert in Namibia. These reddish sand dunes of the desert, seen in the top half of this Overview, are among the tallest in the world, with many rising more than 656 feet (200 meters.) 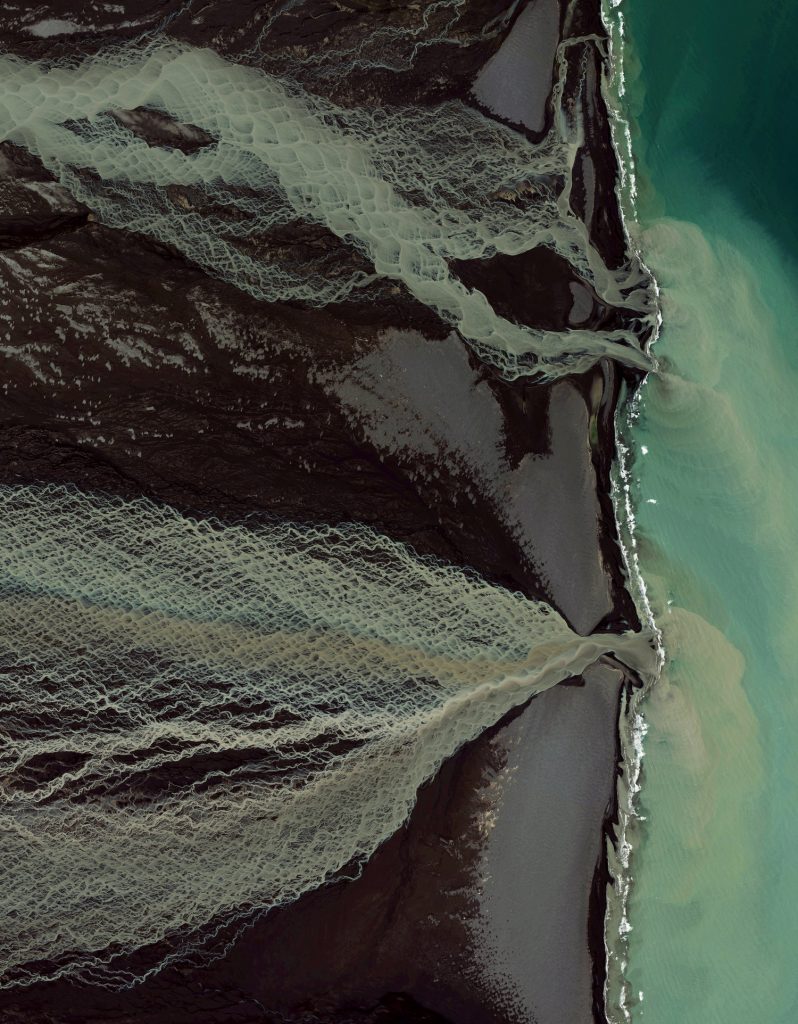 Glacial melting and flooding occurs every year by the Skafta River in Iceland. As the water travels down towards the North Atlantic Ocean, incredible patterns are created on the hillsides. Rising lava, steam vents, or newly opened hot springs can all cause this rapid ice melt, leading to a sizable release of water that picks up sediment as it flows down from the glaciers.

Clearcutting operations in the Amazon rainforest of Para Brazil branch out from one of the state’s central roads. 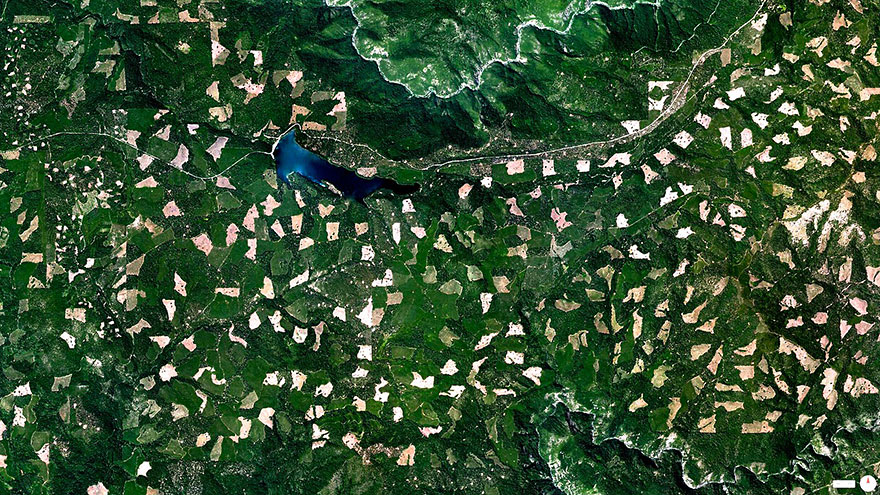 Plasticulture refers to the practice of using plastic materials in agricultural applications. This is visible in the plains and valleys of Almeria, Spain where nearly 20,000 hectares (about 50,000 acres) are covered by these greenhouse structures. 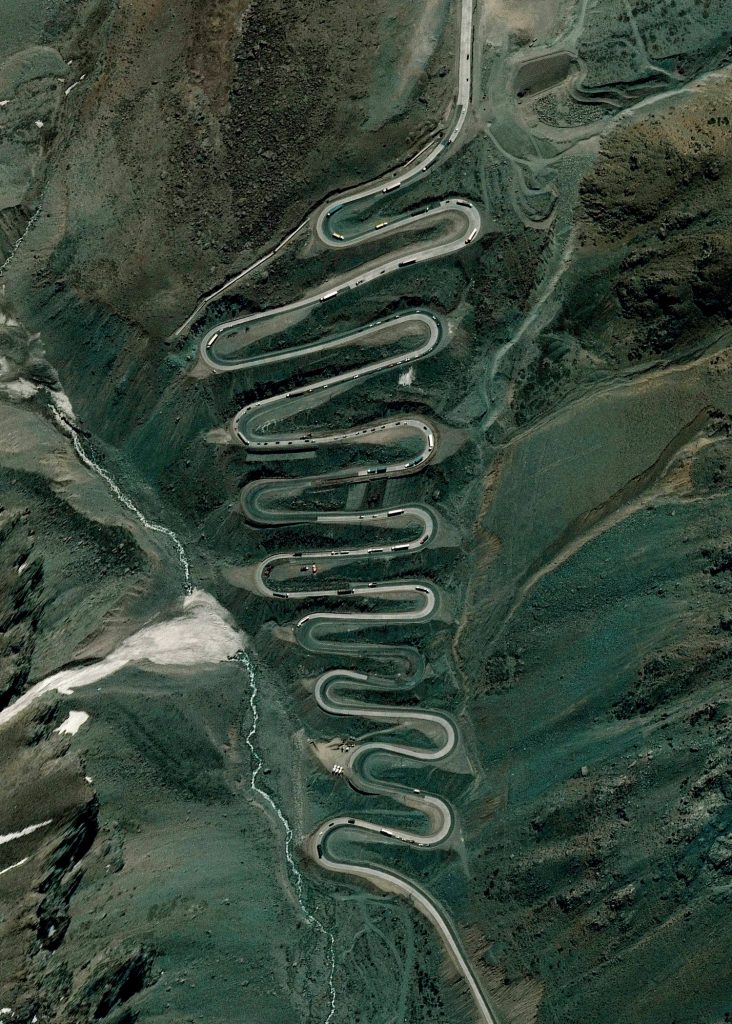 Los Caracoles Pass, or The Snails Pass, is a twisting mountain road located in a remote section of the Andes Mountains on the Chilean side of the border with Argentina. The path climbs to an elevation of 10,419 feet, has no roadside safety barriers, and is frequented by large trucks. 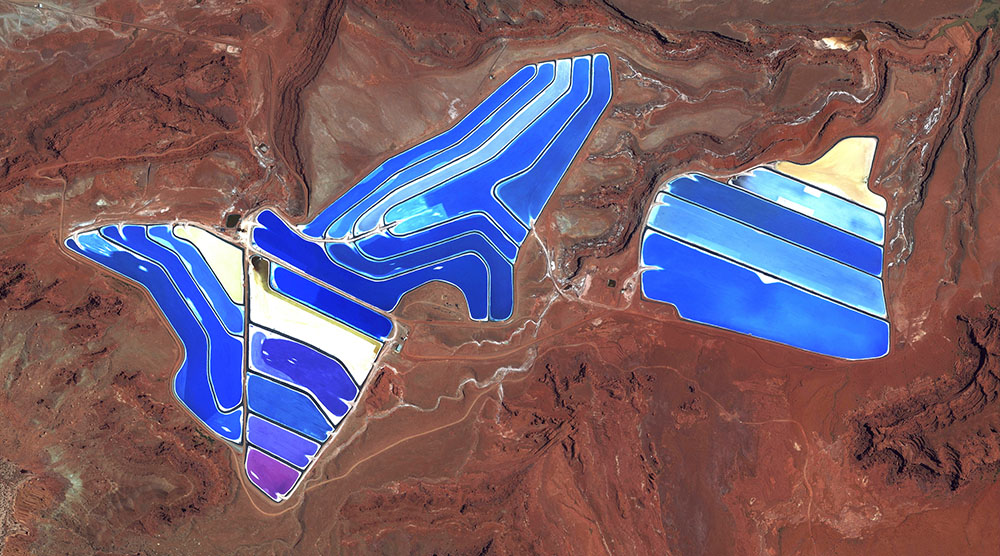 Evaporation ponds are visible at the potash mine in Moab, Utah, USA 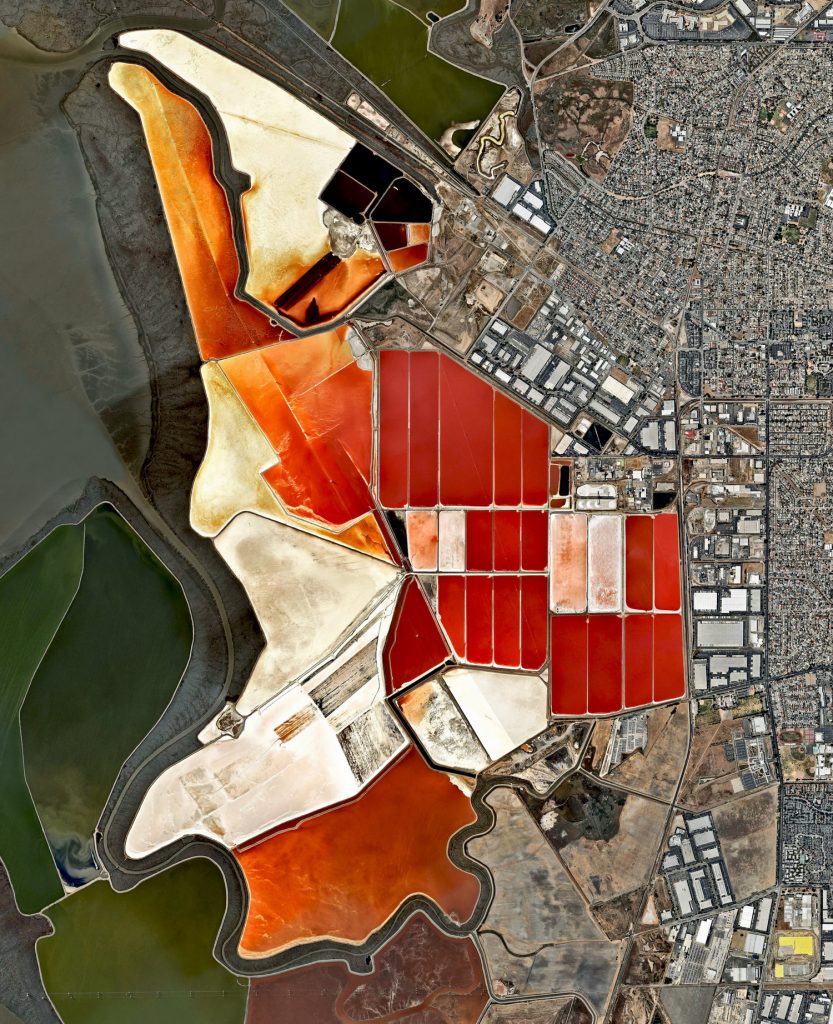 The salt evaporation ponds seen here cover roughly 10 square miles (26 square km) in San Francisco Bay, California, USA. Salt is extracted from the water here through a lengthy process. First, water from the bay is channeled into massive basins where it begins a transformation into brines. Over five years, the brines evaporate, concentrate, and travel several miles before they are collected as pure salt crystals. The massive ponds get their vibrant color from a particular species of algae (Dunaliella) that thrives in extremely salty water and produces a red pigment.

Burning Man is a week-long, annual event held in the Black Rock Desert of Nevada, USA. Each year a community of more than 65,000 participants is erected from nothing with one guiding principle being “leave no trace” as it ends. The event is described as an experiment in community, art, self-expression, and radical self-reliance. This image was taken during the event, in August 2014. 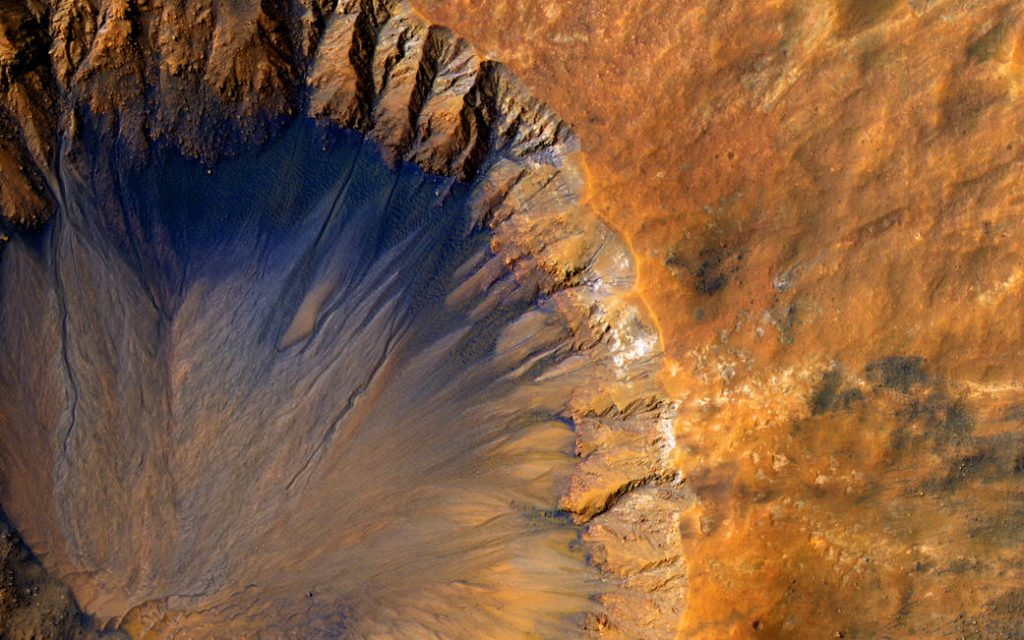 True to its purpose, the big NASA spacecraft that began orbiting Mars a decade ago has delivered huge advances in knowledge about the Red Planet. NASA’s Mars Reconnaissance Orbiter (MRO) has revealed in unprecedented detail a planet that held diverse wet environments billions of years ago and remains dynamic today. 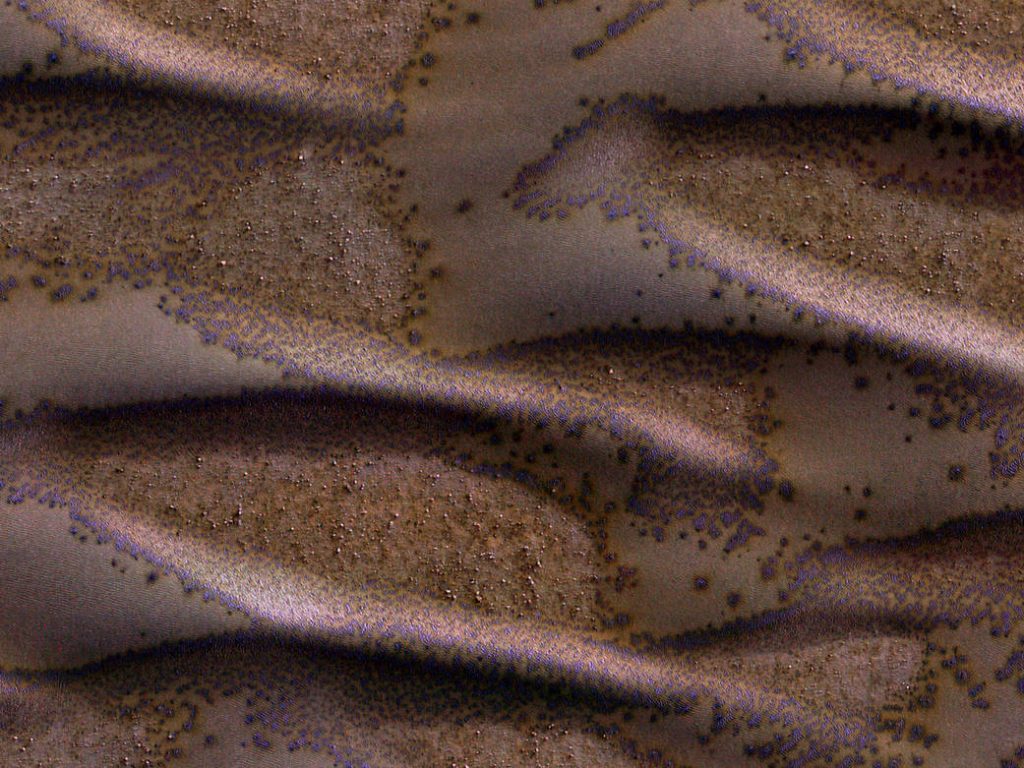 The High Resolution Imaging Science Experiment (HiRISE) camera aboard NASA’s Mars Reconnaissance Orbiter often takes images of Martian sand dunes to study the mobile soils. These images provide information about erosion and movement of surface material, about wind and weather patterns, even about the soil grains and grain sizes.

This image of Solis Planum — a huge mound south of the Mars canyon system Valles Marineris – was acquired by the HiRISE camera on NASA’s Mars Reconnaissance Orbiter on Aug. 16, 2015, at 2:47 p.m. local Mars time. 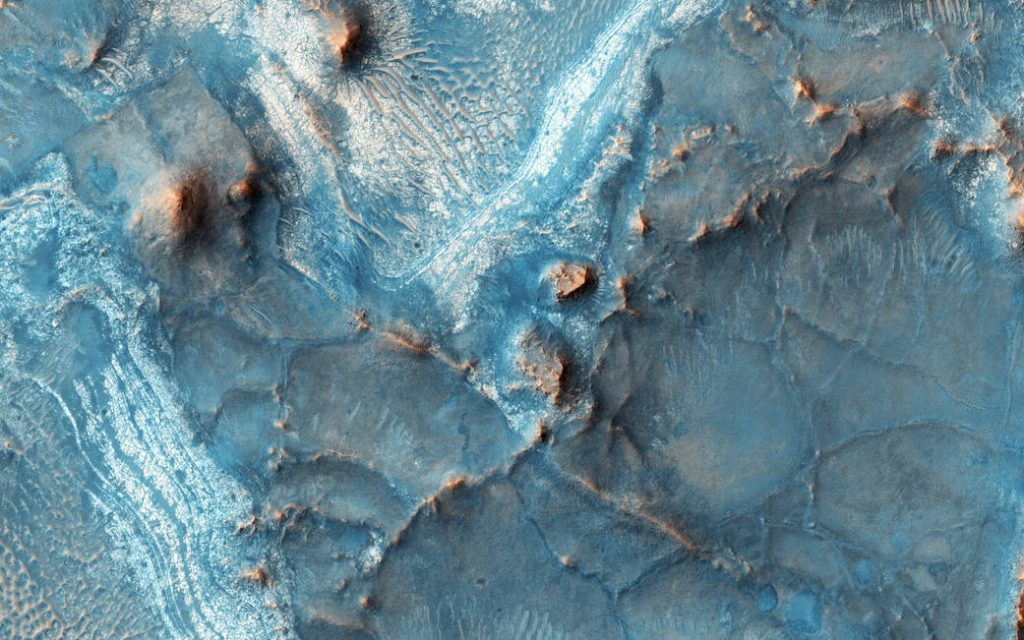 The Nili-Fossae region located on the northwest rim of Isid impact basin is one of regions of Mars. 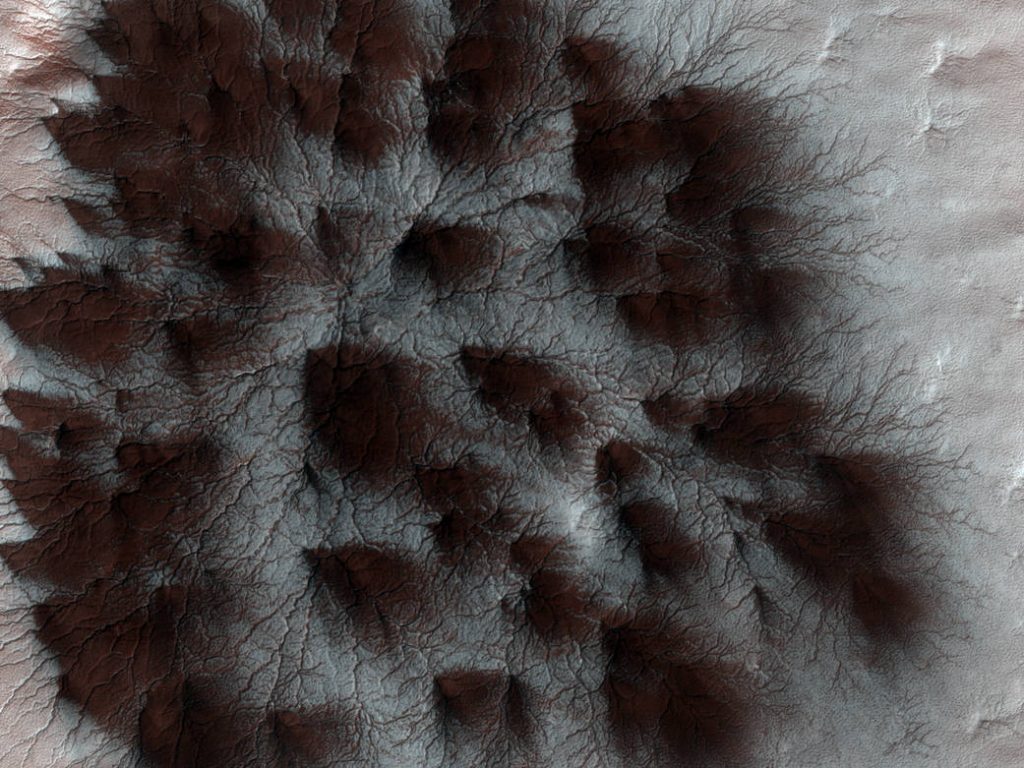 The seasonal cap of carbon dioxide ice has eroded many beautiful terrains as it sublimates-goes directly from ice to vapor-every spring.

Thanks to Lawrence for getting me started on this topic, Bored Panda, NASA and especially to Benjamin Grant and the Daily Overview..

25 thoughts on “Earth and Mars from Satellites”