The lava lake of the continuously active volcano Erta-Ale, Ethiopia 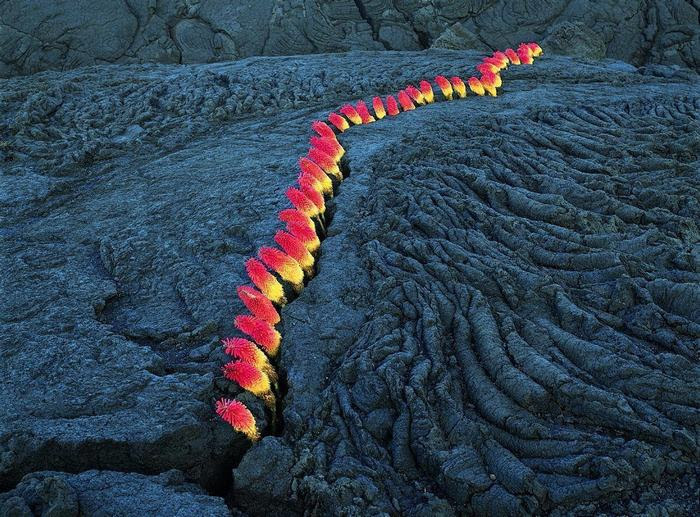 The color coming out of this lava crack has nothing to do with lava or fire. It’s actually flowers called red hot poker or torch lily.

An eruption creates a mountain of ash and smoke over Calbuco Volcano near Puerto Varas, Chile. Photograph and caption by Cote Baeza via National Geographic

Russian Alexey Trofimov captured this image of cracks hundreds of yards long in the ice of Lake Baikal, the world’s largest freshwater lake in Siberia.

These beach boulders are located at Moeraki, New Zealand and occur naturally.

Cold and windy winter weather of the midwestern US has transformed frozen sand on the shore of Lake Michigan in St. Joseph, MI into a sea of tiny wind-sculpted towers. By Joshua Nowicki.

A snow donut is a rare meteorological phenomenon in which large snowballs are formed naturally as chunks of snow are blown along the ground by wind, picking up material along the way, in much the same way that the large snowballs used in snowmen are made. They’re very rarely seen because of the number of weather conditions that need to be just right for them to form – including wind, temperature, snow, ice, and moisture.

Tumbleweeds are actually invasive plants from Russia and are causing a lot of problems. The image is from California. Photograph by Diane Cook and Len Jenshel. 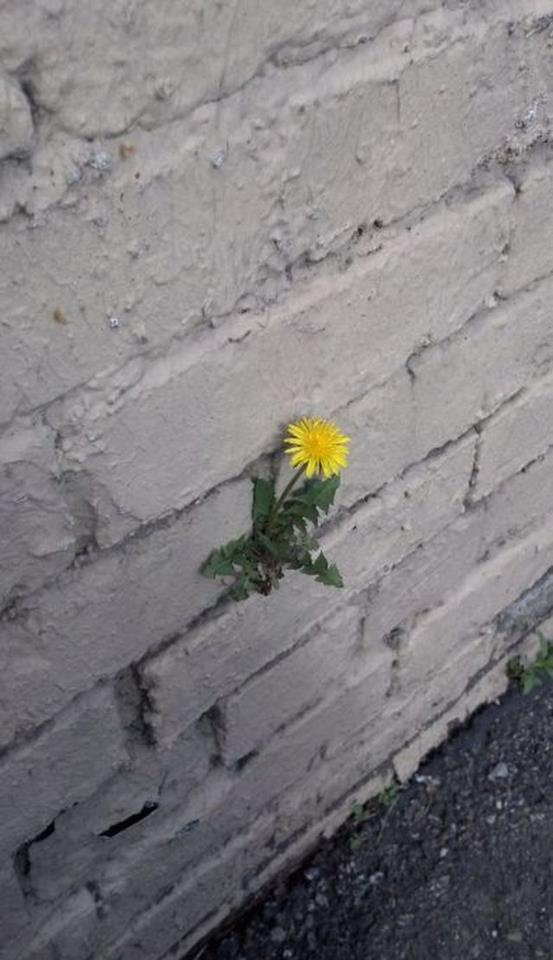 A human determined to have his cigarette. 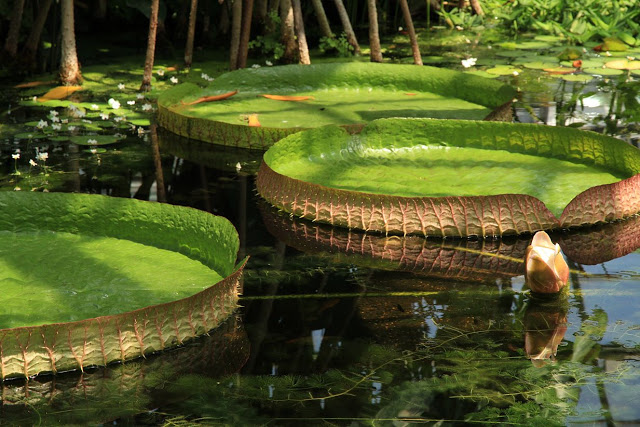 This tropical plant has very large floating leaves up to 3 meters or almost 10 feet in diameter and it is native to the shallow waters of the Amazon river basin.

Rhodochrosite, mineral also known-as the rose of the inca.

Asperatus clouds were only classified in 2009. as a result we know little about them other than that they look amazing.

Time lapse of a vine growing.

A geyser right before eruption

Brinicles form beneath ice when a flow of saline water is introduced. It’s like an underwater icicle.

This unedited image was taken with a tripod mounted in the Pacific Ocean during a winter sunset in White Rock, British Columbia, Canada. Taken at the moment a rock was thrown into the water by Rob Leslie via National Geographic.

Catatumbo lightning occurs only over the mouth of the Catatumbo River where it empties into Lake Maracaibo in Venezuala, 140 to 260 nights a year, 10 hours per day and up to 280 times per hour.

Julieanne Kost spent several days floating between icebergs around Black Head, Cuverville Island, and Pleneau Bay in Antarctica, on a small boat in order to experience ice at eye level. 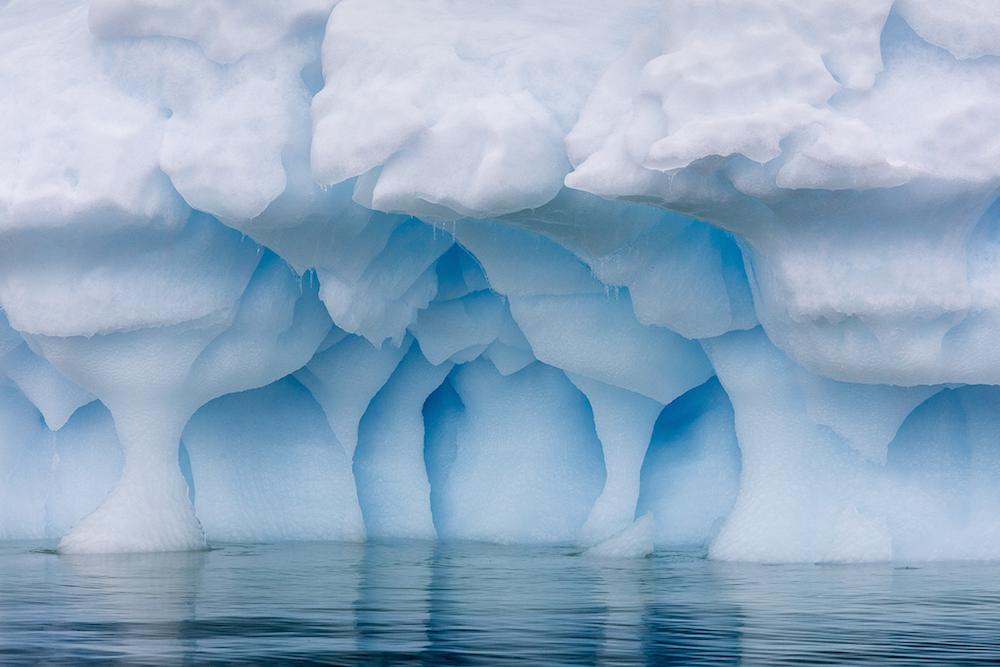 The Valley of the Moon in Argentina is a 223 square mile park that is an UNESCO World Heritage Site.  The area once held lush lands and plenty of water but that is now classified as full desert. It is here that the world’s oldest dinosaur fossils were found while wind and water erosion over millions of years have also given way to stunning formations including fossilized ferns and petrified tree trunks. 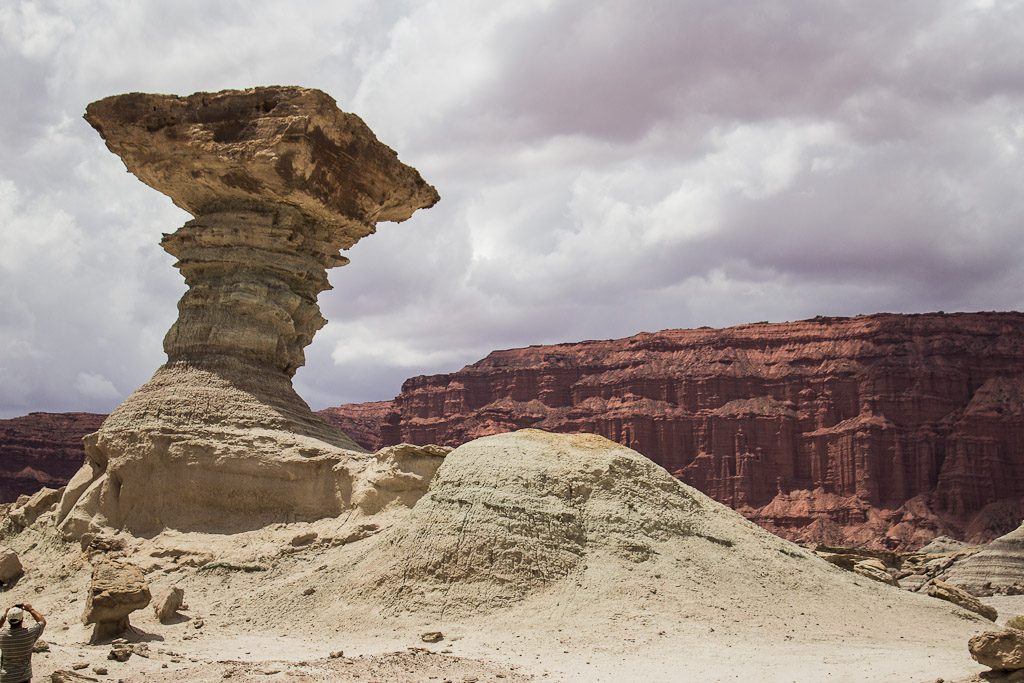 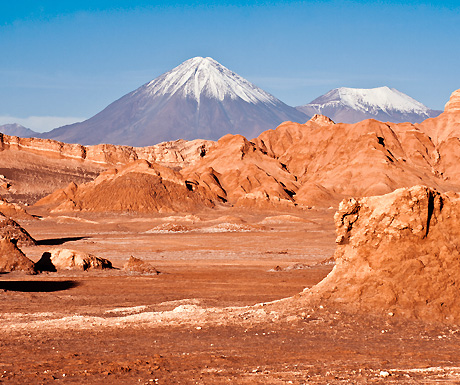 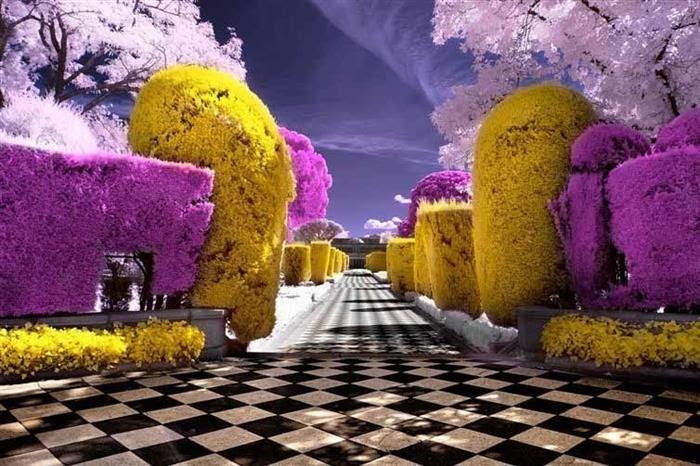 An infrared photo of a garden. This is how a bee sees, via National Geographic 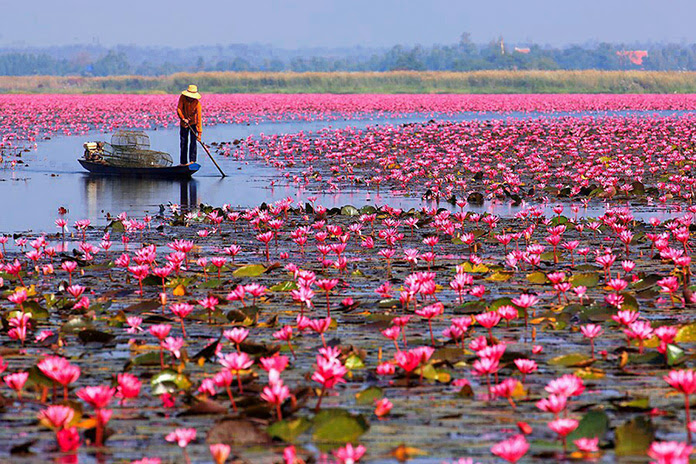 In this “happy face”, the two eyes are actually very bright galaxies and the misleading smile lines are actually arcs caused by an effect known as strong gravitational lensing. Taken by the Hubble telescope and published by NASA.

Thanks to: Wim, George, John, Murray, Patty (aka Patricia) and National Geographic.