Two quirky artists create temples that are monuments to their unique personal visions. To fully appreciate  these images you have to read the stories that go with them.

A massive underground temple lies beneath a suburban house, built entirely in secret by a group of non-architects, working around the clock for 15 years. Dug out of the rock without building or excavation plans, it was all overseen by a middle-aged former insurance broker.

The underground temple spreads over 300,000 cubic feet (8,500 cubic meters) on five different levels, connected to one another by hundreds of meters of corridors.  According to the founder, Oberto Airaudi, or “Falco” as he is now known, the complex is only ten percent complete. 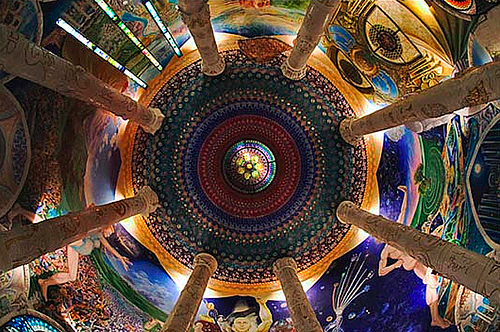 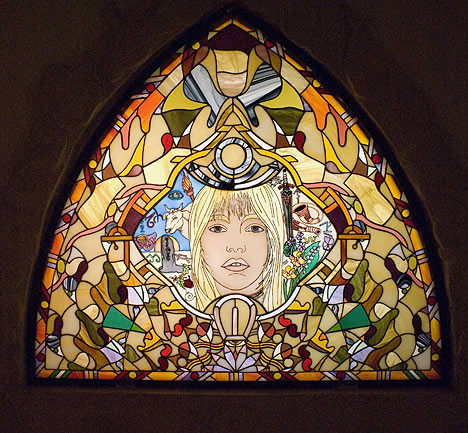 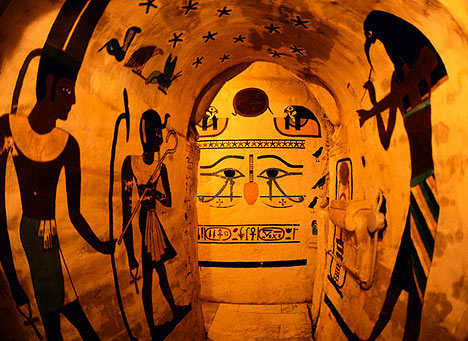 In August of 1978, 28 year old Falco began work on his underground temple. While he chose to keep the project a secret from the government, he did bring on others whom he felt understood his vision. Begun as a group of about 24, the following now numbers over a thousand. Built over a decade and a half, volunteers worked in four-hour shifts, slowly excavating the earth and rock. They often hid the sounds of construction by pretending to throw parties. 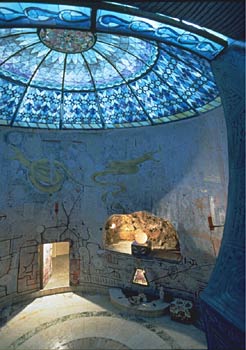 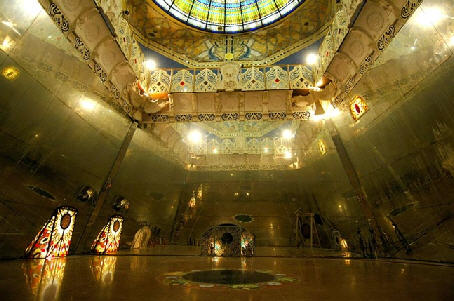 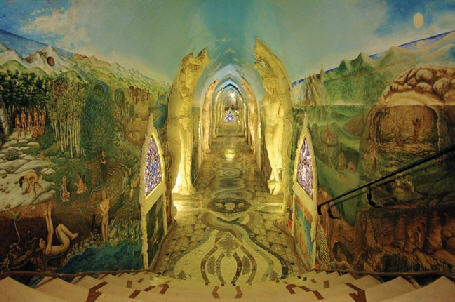 View into a hallway

The Italian police showed up in 1992, 14 years after secret construction was first begun. Having heard rumors of its existence, they demanded to see the temples. When three policemen and a public prosecutor were taken down into the massive and intricately decorated complex they were stunned.  The structure contains a number of spaces, some with ceilings over 25 feet high. One room is a four-sided pyramid covered in mirrors and topped with a glass dome. The ceiling of the “hall of spheres” is covered entirely in gold leaf. 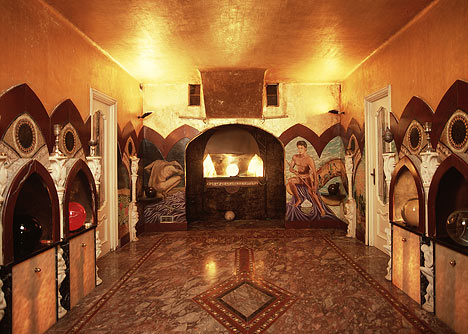 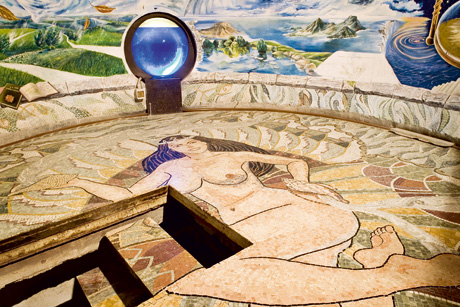 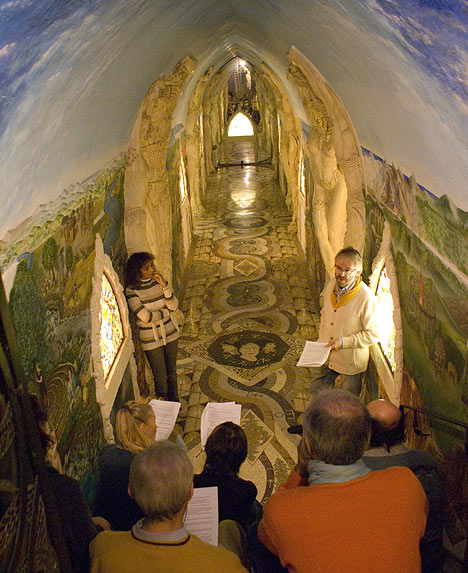 One of the tunnels 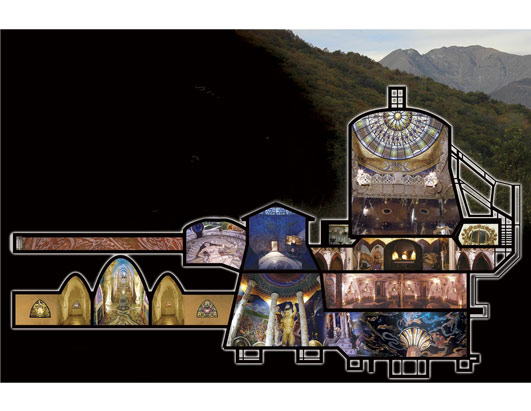 Layout of the various rooms 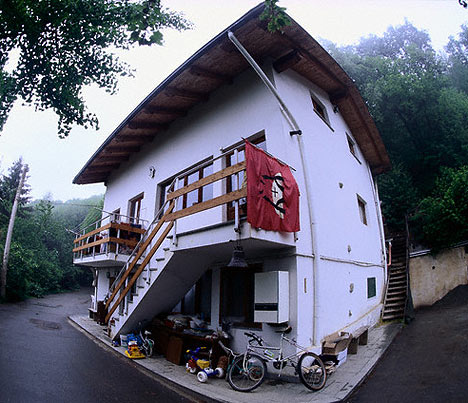 The house it started under.

Now known as “The Damanhur Temples of Humankind.” Falco says the temples are the re-creations of “visions” of elaborate halls, or temples, he experienced as a child.

Some people call the leader and his followers a cult.

Thanks to: Atlasobscura for much of the information, Cosmic machine at blogspot for many of the images, and Merry for turning me onto the story.

The White Temple is the creation of Thai artist Chaloemchai Khositphiphat who started building it back in 1998. He has completed only the first of 9 main buildings planned.  In an interview, he said “I will dedicate all my life to this work. Also, I have at least 2 generations to continue it after my death. I estimate that it will take about 60-70 years to complete.” 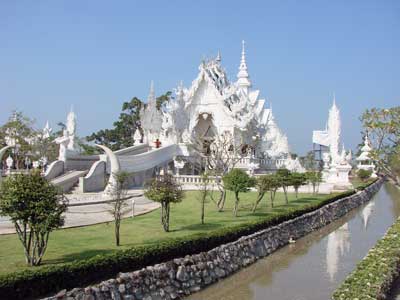 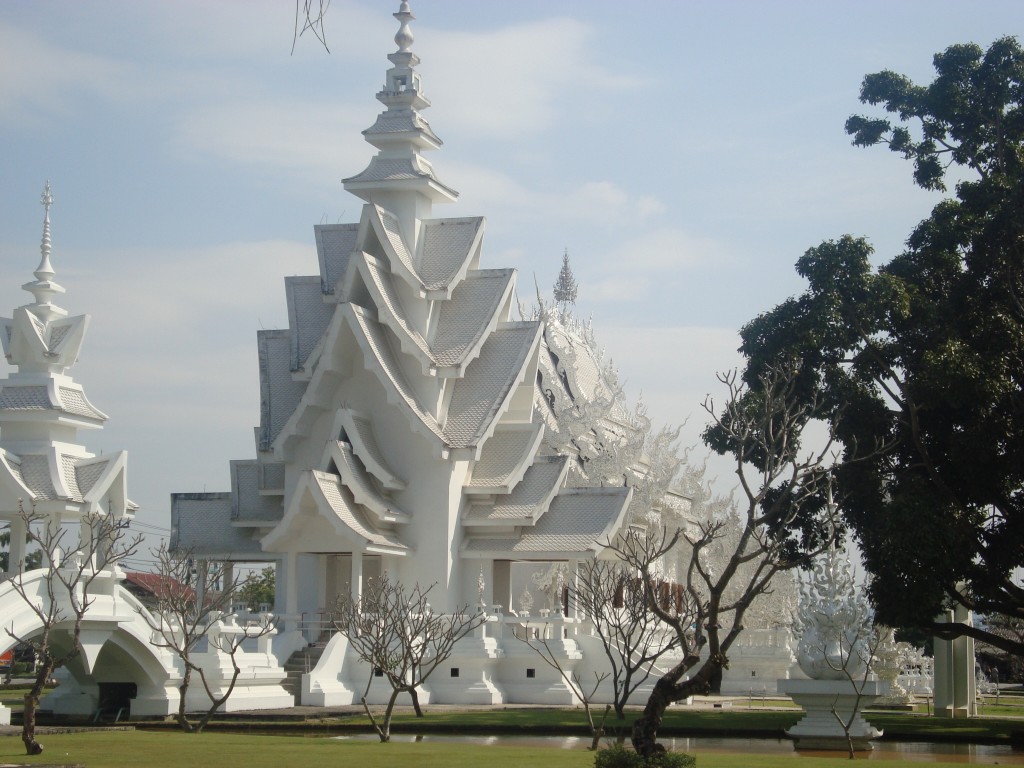 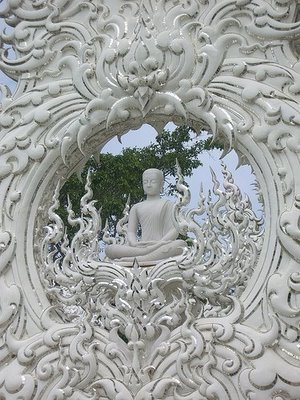 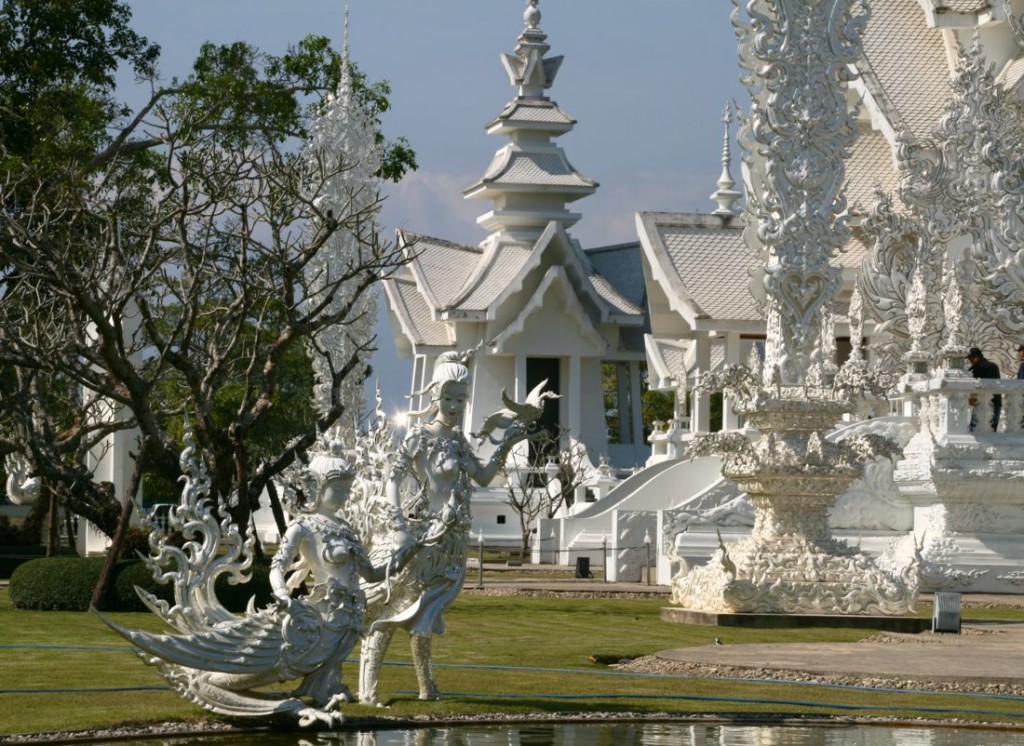 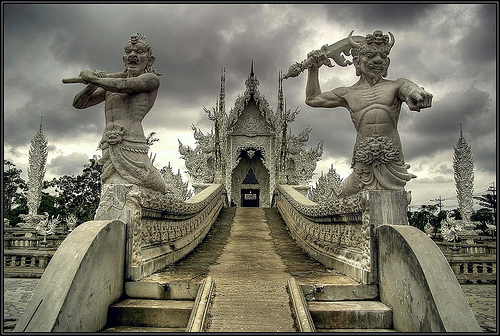 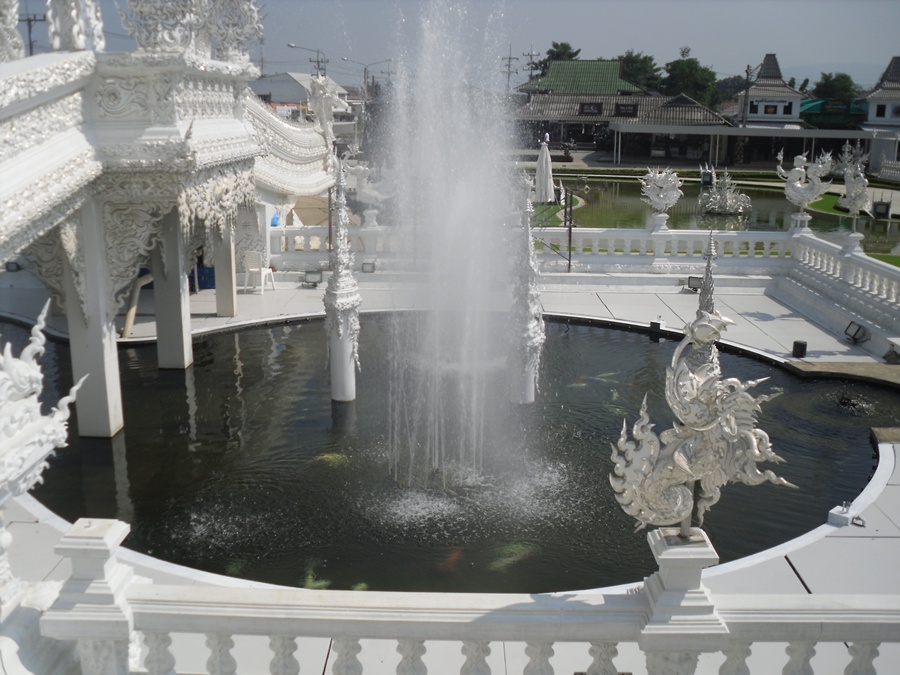 The main building is painted white to symbolize the Buddha’s purity, and is covered in mosaics of mirrors to sparkle in the sun. 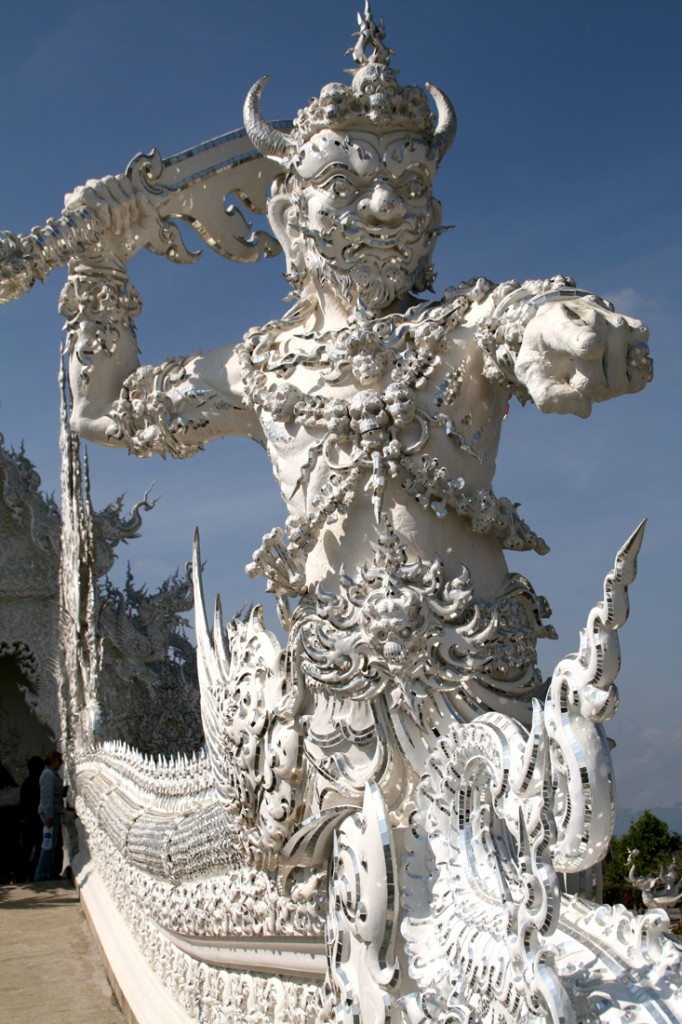 There seem to be meanings to every detail in the temple. In order to go to the main hall (heaven), you’ll have to cross the pit of hell. 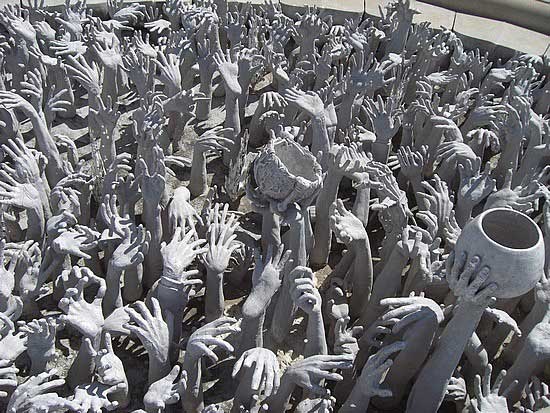 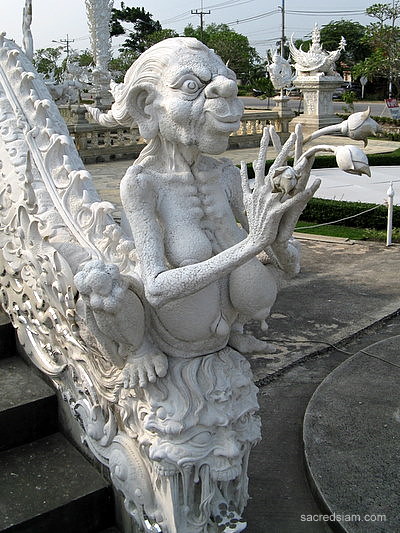 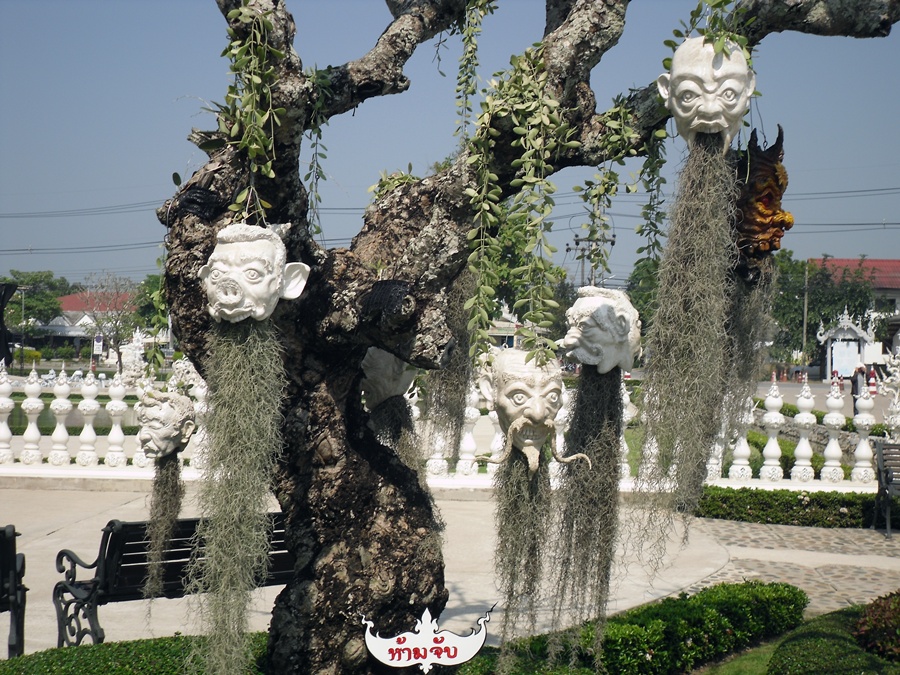 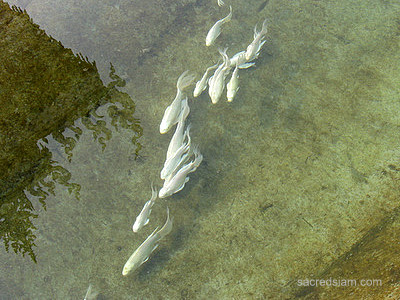 Even the fish are white.

But not the toilet. 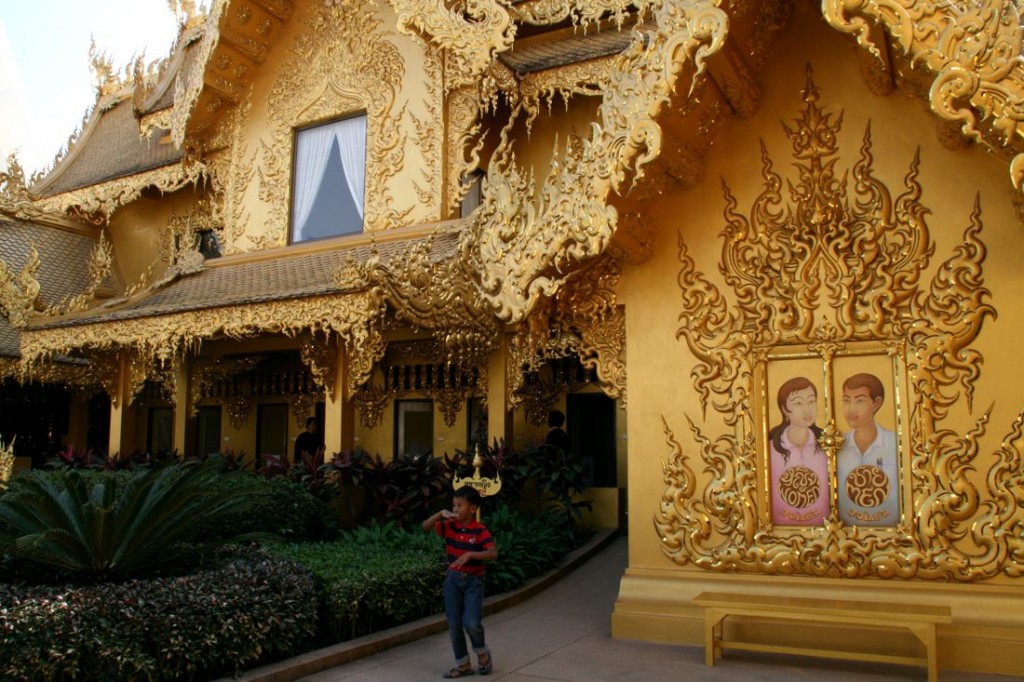 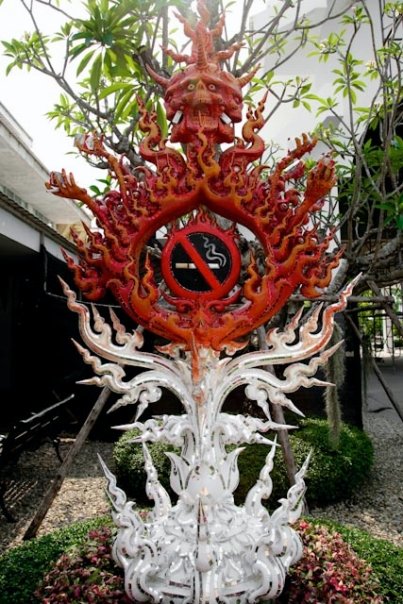 No one is allowed to take pictures inside the temple, so these examples seem to be from the booklet about the temple. 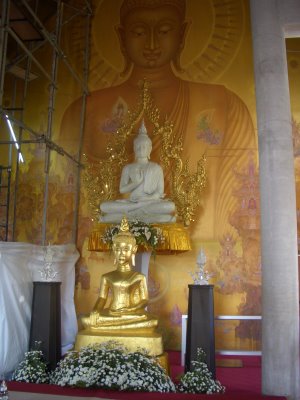 Because the temple is financed by the artist and contributions, Khositphiphat is free to update the traditional Buddhist temple as he sees fit.  Much of the inside of the temple is adorned with a mural which includes contemporary scenes from Hollywood movies and current events.  Among them are superheros like Superman, Spiderman, Neo from the matrix as well as Avatar characters, Jabba the Hut and Darth Vadar from Star Wars, the attack of the twin towers on 9/11, then spaceships, aliens, luxury goods, a gas pump and many things “western.” 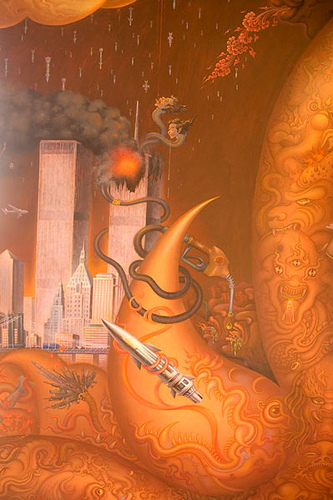 Keanu Reeves as Neo from the Matrix is on the left, creature from Avatar flies in the center. 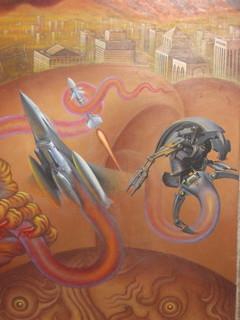 Thanks to Jennifer Heller for getting me started on the white temple.